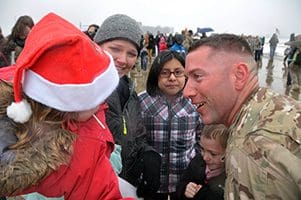 “This is the best weather I’ve seen in nine months,” said Pvt. 2nd Class Hayden Panzer, a plumber with the 829th, as he walked from the passenger jet to the hangar where dozens of families eagerly awaited their Soldiers. His family was unable to make it to the welcome home ceremony, but visiting them was on top of his agenda after the ceremony.

“It will be real good to see them again, I’ll tell you what,” Panzer said.

The 829th, a vertical engineer company headquartered in Chippewa Falls, Wisconsin, with detachments in Ashland and Richland Center, normally erects buildings. However, the unit deployed to Afghanistan earlier this year tasked with an atypical mission.

“Our job was actually to make things smaller and to get people out,” said Capt. Kyle Gruber, company commander. “It was a lot of work – we had to make up a lot of things as we went. It’s not necessarily something the Army does every day.”

The 829th disassembled U.S. military bases, reclaiming materials and in so doing, saving money and denying resources to the Taliban. Gruber said his company racked up more than 114,000 man-hours retrograding five bases. The 829th deconstructed more than 300 structures, turned in more than $18 million in equipment, and built a $400,000 housing area – all ahead of schedule, all while dodging indirect fire.

“It’s a combination of good old-fashioned Wisconsin work ethic, and we trained really hard,” Gruber said. “It comes down to courage.”

Turning to Gov. Scott Walker and Maj. Gen. Don Dunbar, Wisconsin adjutant general, Gruber said, “It is my honor to report that the 829th Engineer Company, vertical, has executed all missions assigned and exceeded the standards across the board, and is now mission complete.”

Dunbar praised the 829th, saying they may never fully realize the lives they positively impacted in Afghanistan.

“You should be proud of the mission you have accomplished,” Dunbar said. “We sent the very best to get the job done, and that’s the 829th.”

Walker agreed. He shared how he had recently spoken with many World War II veterans, members of “the Greatest Generation.”

“I think that tradition is still with us here today,” Walker said. “We saw it not only in World War II veterans, but in Korea, in Vietnam, in Desert Storm – and for many of you here today, this wasn’t your first return home from a deployment, but one of many.

“I think about this proud tradition, not just in this country but in this state, of men and women like each one of you here,” Walker continued. “On behalf of a grateful state and nation, we say ‘thank you.'”

Spc. Nathaniel Hitchcock and his younger brother, Spc. Johnathan Hitchcock, from Ashland, Wisconsin, each have less than three years in the military but now have one deployment under their belt. The deployment proved to be a different experience than they anticipated, but they’re not complaining.

“I thought we’d do convoys to places, but we ended up taking airplanes and helicopters everywhere,” Nathaniel said.

“We did great things over there,” Nathaniel said. “It feels great to accomplish that.”

Dunbar observed that few Americans wear the military uniform, and fewer still deploy to a combat zone. While that experience is rare, he said, time with family is more precious still.

“You’re home, it’s the eighth of December, we’re about to go into the holiday season,” Dunbar said. “I would encourage you to drink deeply – of the time with your family. The chance to spend the holidays after a deployment with your families is a rare gift.

“I hope you take advantage of that time together,” he continued, suggesting that his words were more than a warm sentiment: “Anybody here who’s full-time in the Guard, if you try and show up in the armory before Christmas, you’re fired.”

Command Sgt. Maj. Bradley Shields, the Wisconsin Army National Guard’s senior enlisted advisor, told the returning Soldiers that they were now beginning the reintegration phase of their mission. He cautioned the 829th that their families had spent several months navigating life without them, so returning to life as it had been before the deployment would take time and effort.

“Be patient with each other,” Shields said. “Everybody has changed during this time of separation. Leave time to get to know each other again. There are a lot of resources here to help with that.”

Gruber thanked the unit’s Family Readiness Group volunteers for their resilience, caring and understanding during late nights, absences for training, and their efforts during the unit’s deployment.

“I believe they are the best family readiness group in Wisconsin National Guard history – period.”

Gruber also thanked the families, crediting them for the unit’s success.

“You have raised incredibly motivated, disciplined, mature and hard-working Soldiers,” Gruber said. “This is the only unit in the task force that always completed work ahead of schedule and above the standard. The accolades and awards received by your Soldiers bear witness to this. Your Soldiers received more than double the number of awards and accolades of any other unit in the task force.

“This is your honor, too,” he told the families. “You are all master builders, evident by the strong men and women I brought back to you and who are standing here today. Thank you for lending them to me for service to this great nation. Very shortly, you can have them back.”