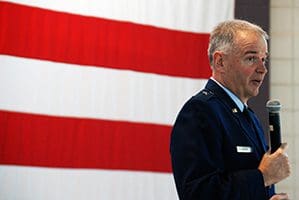 Brig. Gen. John McCoy, a Wisconsin National Guard member for nearly 36 years, has been selected for a two-star position with the Air Education and Training Command (AETC) at Joint Base San Antonio-Randolph.

McCoy, currently the deputy adjutant general for civil support, is expected to begin his new job as Air National Guard assistant to the AETC commander in May. One of 10 major commands in the Air Force, AETC is responsible for training and education for the Air Force, Air Force Reserve and Air National Guard. This includes initial military training, officer training, technical training, pilot training and professional military education courses.

McCoy will advise and assist the AETC commander and staff on the impact policies and programs will have on the more than 106,000 Air National Guard members who make up 88 Flying Wings. He comes aboard as the AETC realigns its command headquarters to better support recruiting, flying and technical training, and education.

While he will remain a member of the Wisconsin Air National Guard in this capacity, he will not maintain his role leading the Wisconsin National Guard’s joint staff in domestic operations, where he was responsible for logistics, command and control, communications, intelligence, manpower and personnel, counter-drug and other critical functions.

“I’ll be, in effect, promoted out of my job,” McCoy explained.

“Next week, the guy I’m replacing will be in San Antonio,” McCoy said. “I’ll be down there for 24th Air Force business, so we’re going to get together and do a little preliminary [transition training]. We’ll do that this month, probably again in February, potentially in March, and then I’ll transition in.”

McCoy also recently concluded his leadership role as the national vice chair for the Air National Guard Strategic Planning System. He said those additional experiences, along with his prior assignment as the top officer for the Wisconsin Air National Guard, counted toward his selection to be the next Air National Guard assistant to the AETC commander.

“They kind of create an order of merit list for the position,” McCoy said. “The commander at AETC has an opportunity to say yes or no, and ultimately the selection was made.” 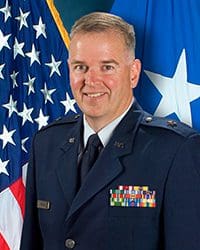 Between now and May, McCoy will not only be preparing to step into his new job, but preparing his successors at 24th Air Force and the Wisconsin National Guard Joint Staff.

“One of the great things about Wisconsin is we have great people,” McCoy said. “I’m confident it won’t take long for whoever replaces me to get up to speed.”

“It’s a great opportunity for input from a Guard perspective,” McCoy said. “With coming out of 24th Air Force, some of my experiences there from a cyber aspect, information technology, the various things I’ve been exposed to there, and trying to improve the cyber training pipeline, I think I can bring some additional perspectives into the overall [question], ‘how do we deliver training?’

“I think I’ve got some ideas in that regard that will hopefully pay dividends for all of us who go through training.”

Beyond the pending promotion to major general, the new job brings major changes for McCoy — notably time commitment. For 30 of his 36 years in uniform, McCoy has worked full time for the Wisconsin National Guard — “almost double-time in some respects, doing the dual-hat with the 24th Air Force and other responsibilities,” he added. The new job at AETC returns him to part-time status, bringing perspectives and ramifications he is still working out.

“But the sky’s the limit on how it will really turn out,” McCoy said. “I didn’t get here on my own.”

He thanked Maj. Gen. Don Dunbar, Wisconsin adjutant general, and Gov. Scott Walker, among others for their support. He noted that Maj. Gen. Steven Foster, a former commander at the 115th Fighter Wing in Madison, Wisconsin, went on to positions with Northern Command (NorthCom) and Central Command (CentCom). And Maj. Gen. Fred Sloan, a former deputy adjutant general for Air in Wisconsin, went on to serve as Air National Guard assistant to the commander of Air Combat Command.