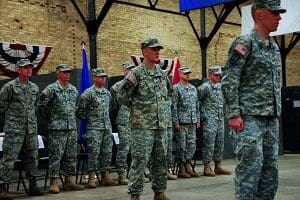 The medal was awarded to Zerbst for wounds received when his vehicle was hit by an improvised explosive device while he was deployed to Iraq in 2007. At the time of the attack, Zerbst was serving with the Wisconsin Army National Guard’s Troop E, 105th Cavalry.

“Everything kicked in,” said Zerbst of the incident. “Instinct and training kicked in. We just kind of kept going and didn’t think too much of it. The vehicle was still running and drivable, so we just kept going to where we needed to get to.”

Both Zerbst and the other Soldier in his vehicle were monitored for 24 hours after the incident. After that initial period, they were able to return to working and completing missions.

“That definitely felt good, because out of a unit of almost 200 soldiers we only had five of us that were qualified on the equipment to run the wreckers,” Zerbst said. “Losing one would put a lot more strain on the other guys.”

Zerbst sustained a traumatic brain injury and some permanent hearing loss on one side as a result of the IED. His unit submitted him for the Purple Heart Medal after his return from Iraq in 2008.

“When this particular injury was happening, the Purple Heart was designed for combat wounds, and the Army didn’t recognize the type that he sustained,” said Maj. Gen. Donald Dunbar, Wisconsin’s Adjutant General.

The Army has since recognized the types of injuries Zerbst sustained, Dunbar said, but it was a long process to document and prove that the Soldier deserved the medal.

“We supported him 100 percent of the way, and he’s doing a great job for us,” Dunbar said. We’re really proud of him.”

“So while this award is delayed, we never stopped pressing to make sure that we honored this Soldier for his courage.”

“It’s an honor,” said Zerbst. “It’s surprising to see everyone that came out. I’m very grateful that they did, especially my family.”

Zerbst was accompanied by his wife, Sarah, their two sons, Owen, 5, and Carter, 1, and his parents, Debra and Dean. Both Zerbst and his wife felt like this was a long time coming.

“I was in shock, just like he was,” said Sarah about hearing news of the award. “It’s humbling to know that he is going to be one of those very few people that are recognized for what he sustained overseas.”

Zerbst is still dealing with his injuries from that day in October 2007. He said he works every day to adapt to or work with the changes in his life. He is humble about the whole experience.

“It is a great honor,” he said. “It’s kind of overwhelming to really think about the fact that others that have gotten the similar award are in a lot worse situations.”

Zerbst has shared his story with other Soldiers in the hopes that they will learn from his experiences. He hoped to encourage other Soldiers to overcome obstacles.

“Don’t get too settled in the way of what you think is going to happen,” said Zerbst. “No matter how different stuff might go, or how wrong it may seem like it’s going, or how bad it might seem, everything does end up working out in the end for you. But you’ve got to be ready for it.”