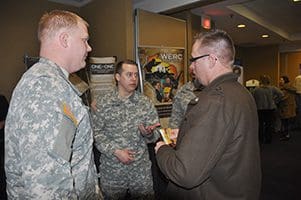 GREEN BAY, Wis. — The state of veteran unemployment in Wisconsin is improving — but more can be done.

“Because of the good work of our Department of Veterans Affairs and the successes we’ve seen across the entire state over the last four years, we’ve been able to cut our veterans unemployment rate literally in half,” Lt. Gov. Rebecca Kleefisch said in Green Bay at the first of three Governor’s Summits on Wisconsin Veteran Employment. “The more we are able to do that, the better off we will be.”

Capt. Joseph Ledger, formerly the manager for the Wisconsin Department of Military Affairs’ Wisconsin Employment Resource Connection (WERC) program and now the project officer for National Governors Association Veteran Employment initiative in Wisconsin, noted that in 2012 unemployment among Wisconsin veterans was around 10 percent. Two years later, the rate had improved to 5 percent, with preliminary indications that unemployment among veterans was continuing to drop in 2015.

The summit’s purpose was to publicize three civilian career fields — nursing, law enforcement and truck driving — where credentialing and licensing requirement are being streamlined for veterans and service members with similar military training. John Scocos, secretary of the state Department of Veterans Affairs, explained that Wisconsin was one of six states to take part in a National Governors Association initiative to make it easier for veterans to find meaningful work in the civilian marketplace.

“These states developed, tested and evaluated strategies to create accelerated credentialing processes for service members and veterans who had served and received relevant training or experience,” Scocos explained. “Today we want to share with the public our successes.”

Ledger said there are two challenges to transitioning unemployed or underemployed veterans into the civilian workforce. The first is to convince the veteran that they possess skill sets beyond their military occupation — for example, planning, decision making, risk assessment — that civilian employers value. The second is to educate civilian employers about the untapped resources veterans can provide.

“Veterans have a certain, special something — soft skills, those intangibles that you can’t quite put your finger on, but you know are there,” Kleefisch said. “The leadership, the followership — veterans truly understand how to show up, work hard, and give their all to growing the economy. They know exactly how to be the finest employee that Wisconsin has to offer.”

Michael Trepanier, deputy secretary with the state Department of Veterans Affairs, detailed some of the other challenges in streamlining paths for veterans to gain employment in similar civilian fields.

“When you talk about these experiences veterans bring, you are also talking about different services,” Trepanier said. “They go to different [military] schools. And even the difference between an E-1 and an O-5” — the entry-level enlisted grade and a lieutenant colonel or Navy commander — “is tremendous as far as experience.”

The streamlined pathways from the military occupation to civilian occupation, therefore, had to take those dynamics into account. Additionally, the state has worked with its various agencies to credit certain military training and experience toward the civilian training required for nursing, law enforcement and truck driving — VET 2 RN, Law Enforcement Accelerated Development (LEAD), and Making Opportunities for Veteran Employment in Transportation (MOVE-IT), respectively.

Even so, Ledger said there was reason to celebrate the progress to date.

“These were concepts a year ago, and through the NGA project it became real,” he said.

One of the next steps, Ledger said, was to gauge the military occupation skills in Wisconsin beyond combat medicine, military police and military truck drivers, and determine what the employment need is among those military skill sets and identify a complementary civilian occupation — a process Scocos called “a holistic approach to employing veterans.”

“Service members have all passed background checks,” he said.

The combination of soft skills — knowing how to interact with supervisors — as well as dedication, decision-making skills, and military training have helped WERC assist more than 870 veterans and service members into the workforce. WERC has also helped customers write and update more than 1,200 resumes, and conducted more than 500 mock interviews.

“We’ve had many successes like this for veterans over the last four years,” Scocos said. “We wouldn’t have them if we didn’t have the support of the folks who are here today. It is through partnerships of people that this initiative and many others are possible.”

Michie summed up the sentiment of the summit.