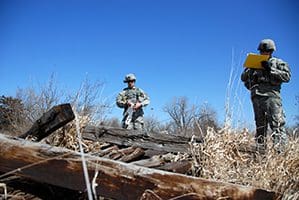 Railroad ties, collapsed culverts, fire hydrants and steel pipes were among the many unique features and potential hazards identified and marked by approximately 200 Wisconsin Army National Guard Soldiers at the site of the former Badger Army Ammunition Plant near Baraboo, Wisconsin, March 28.

The Soldiers were part of the Madison, Wisconsin-based 1st Squadron, 105th Cavalry Regiment. Troop A, from Fort Atkinson, Wisconsin, and Troop B, from Watertown, Wisconsin, were on-hand to assist the Wisconsin Department of Natural Resources with the site survey. The DNR, the Ho-Chunk Nation and the Dairy Forage Research Center all own portions of the sprawling 7,534-acre site, and the site survey took place on the DNR’s parcel.

The unit spent the day combing the property and logging unnatural features or remnants of the more than 800 buildings that once dotted the landscape near Devils Lake State Park. The 105th will ultimately compile a report of its findings and present it to the DNR, which is preparing to re-open the site to the public as the Sauk Prairie Recreation Area. 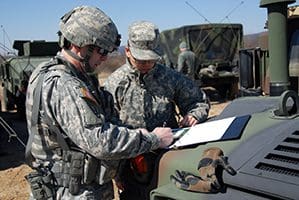 While the day’s efforts represented a valuable training experience that tested some of the unit’s key military skills as a cavalry unit, it also provided an opportunity to give back to the community and aid a state agency.

As a cavalry unit in combat, the 105th would be expected to conduct reconnaissance of large areas and transportation routes. Traversing the Sauk Prairie Recreation Area site allowed the unit to test its map-reading, terrain navigation and area reconnaissance in an area in which they had never previously trained. 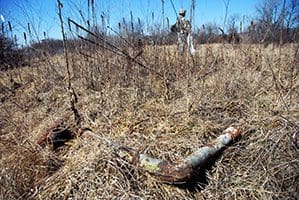 “It’s a good benefit for both of us,” said Sgt. Shawn Thomas, a truck commander in Troop A. “We get the training, and they get our expertise. It’s a win-win no matter which way you look at it.”

The unit broke the site into smaller sectors, and teams spread out on foot and in vehicles in search of items of interest. Their search yielded collapsed tunnels, sink holes, wells, pipes, telephone poles and other evidence of what was once a sprawling complex. They marked each item or area with white engineer tape, assessed the item’s condition, logged its exact grid coordinate location and continued moving. The DNR can now use the information for any final cleanup that needs to happen before opening it to the public.

“The biggest thing is just attention to detail,” said Staff Sgt. Daniel Venure, a section leader in Troop A. “Just making sure we’re covering all the ground. For area reconnaissance, you’re given a grid, and we’re just kind of working back and forth and just being as thorough as possible to make sure that we cover. That way the DNR gets all the information that we can possibly give them on what’s actually out here.”

The federal government has spent the last 10 years removing buildings, cleaning up soil contamination and reducing the remaining footprint left by the plant. 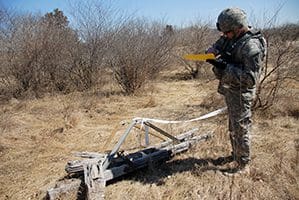 “We are confident that the nearly decade-long clean-up of the plant has been thorough and complete,” DNR Secretary’s Director Mark Aquino said in a news release announcing the agency’s partnership with the National Guard for the March 28 site survey. “This is above and beyond our normal routine cleanup practices and will provide an extra level of assurance that we, and the Army, haven’t missed anything.”