Red Arrow and Special Forces Soldiers team up for training 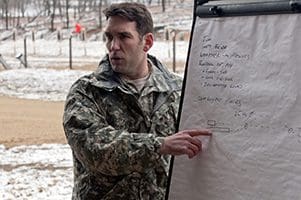 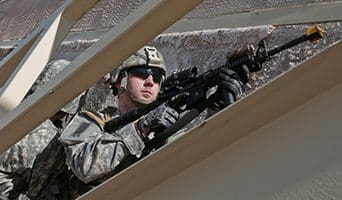 “We try to take pieces from other units to help build ourselves,” said 1st Lt. Austin Peck, a scout platoon leader with Detachment 1. He went on to explain that they often work with different units in order to amass a larger range of skills that they can apply to their own training. Many members of the Detachment expressed their interest in being able to work alongside Special Forces Soldiers, since some are hoping one day to join their ranks.

“I’ve always wanted to become a ranger or a Special Forces member,” Pfc. Kyle Nicks said. “Training with these guys will hopefully give me the knowledge and skills to join them one day.”

This was a special training event for the Detachment, Staff Sgt. Matthew Ward explained, because even though they are infantry members themselves, they can learn a lot from the specialized training of the Special Forces Soldiers.

“It’s been very helpful; these guys have taught us a lot, and we need to take what we’ve learned here and build upon it,” Ward said. “They gave us the tools to build ourselves up, and now it’s up to us to go ahead and make something from them.”