Wisconsin Guard among best in Army Communities of Excellence 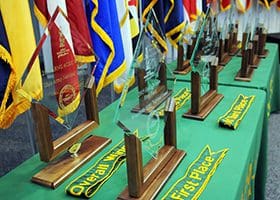 Wisconsin is once again counted among the top Army National Guard organizations with its Gold Division First Place finish in the 2015 Army Communities of Excellence (ACOE) program.

“This recognition is a reflection of the tremendous effort on the part of many Soldiers in the Wisconsin Army National Guard who continue building readiness and improving our processes across all the functions necessary to make us one of the best Army National Guard’s in the nation,” said Brig. Gen. Mark Anderson, deputy adjutant general for Army and the Wisconsin Army National Guard’s top officer. “Our participation has been a conscious effort on our part to continue to promote efficiencies, improve our readiness and take better care of our Soldiers and accomplish our mission.”

Awards were presented April 29 at the Army National Guard Readiness Center in Arlington, Virginia. Other top finishers included the Indiana Army National Guard and the Texas Army National Guard.
ACOE Awards program participants are not judged against each other. The 12-month evaluation — July 2013 through July 2014 for this award — measures Army, National Guard and Army Reserve installations against Army priorities and the Malcolm Baldrige National Quality Program criteria. The assessment considers the overall quality of military environment, facilities and services.

“It’s about learning, improving and sharing,” Brig. Gen. James Wong, special assistant to the director of the Army National Guard, told ACOE awardees at the ceremony. “It’s about striving to be better leaders, better stewards of resources, and more responsive to our Soldiers and our customers. Your collective efforts have a strategic impact, both within the Army and across the Department of Defense.”

The ACOE program — a holistic integrated business management approach to measure organizational performance — is based on the idea that communities have the greatest success supporting people when excellent services are combined with excellent facilities in a quality environment. ACOE guidelines state that Soldiers who are convinced their leaders care about them and their families perform their mission with greater confidence.

“Although the ACOE and the Baldrige criteria are primarily business approaches, we are a business in a way,” said Col. Brian Wolhaupter, the Wisconsin National Guard’s strategic planner. “We have to be able to take those same tools and apply them to ourselves, because in the end, in an era of changing environments and constricting funds and constricting resources, the same limitations apply to us that apply to the corporate world and everywhere else.”

Wolhaupter led the effort to create Wisconsin’s 55-page ACOE submission packet, which demonstrated how the Wisconsin Army National Guard lived by the criteria set forth in the competition.

“Just to have been considered for a site visit in the top four and then to have finished in the top two across the 54 states and territories is fantastic,” he said. “The whole ACOE journey and process isn’t about a contest — it’s about the organization and how well we understand what we’re supposed to do and how we can be better, and continuously review who our customers are, how we serve them and how we are true to ourselves. I’m incredibly proud of the team and the organization for their demonstrated excellence.”

“We know how to measure and we know how to fix problems,” he said. “We now need to place more work and efforts towards not having the problems, because we’ve anticipated them and we’ve designed a way forward that accomplishes what we want to accomplish versus fixing stumbles.”

“We have all of those things,” Wolhaupter said, “and so I am confident that not only have we done well for many years, but we’ll continue to be at the very lead of the Baldrige criteria and ACOE community in the upcoming future.”

Staff Sgt. Michelle Gonzales of the National Guard Bureau contributed to this report.