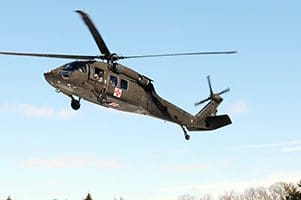 The unit, based in West Bend, Wisconsin, will deploy Soldiers from Companies C, D and E of the 2nd Battalion, 135th Aviation for the mission where they will provide helicopter medevac assets and maintenance support to American personnel operating in the region. The battalion is made up of National Guard aviation units spread across Colorado, Nebraska and Wisconsin, and the Wisconsin Soldiers will deploy as part of a larger aviation task force being sent to the region.

Upon arriving in the Middle East, the unit will provide timely and efficient aeromedical evacuations using the UH-60 Blackhawk helicopter and effective enroute care from the point of injury to a medical treatment facility.

The 2nd Battalion, 135th Aviation is specially trained for such a mission, as the unit has undergone training for aircraft maintenance, refueling operations, flight medic treatment, hoist operations and operating the UH-60 Blackhawk in various modes of flight. The unit has also prepared by attending various helicopter aviation courses in Colorado, Connecticut and Alabama.

The unit previously deployed to Iraq in 2010 in support of Operation Iraqi Freedom and Operation New Dawn.

The Wisconsin National Guard is planning a sendoff ceremony for the unit and will announce that information as the unit’s deployment draws near.