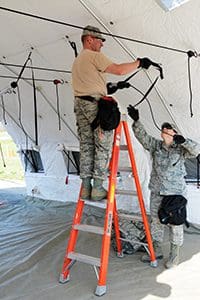 The exercise allowed service members to prepare for the first-ever CERFP one-day inspection, scheduled to be held next month.

“This is going to be the first team to be evaluated using a one-day evaluation process, so they are kind of in the spotlight,” said Travis Dauer, National Guard Bureau Joint Collective Training Branch weapons of mass destruction-chemical, biological, radiological, nuclear analyst.

Dauer visits exercise sites across the nation to ensure Guard members and inspectors have the funding and equipment they need prior to their inspection day. The inspection itself provides the team with reassurance that they are prepared to respond quickly and efficiently, should a natural or man-made disaster occur.

Airmen and Soldiers are assigned to specific components within the CERFP. The various components include command and control, decontamination, search and extraction, medical, fatality search and recovery, and the joint incident site communication.

“This is a joint program – that’s the way it was designed,” Dauer said. “The interaction between the Army and the Air is a big piece of this program.”

“It’s fun to have that ‘purple force,'” he said, referring to the red and blue flags that denote Army and Air Force. “I think we’re seeing that more and more across the military. The public doesn’t expect the military to be in individual silos – they want them to work together. We’re learning to work together and speak the same language because we’re here – especially in the Guard – to take care of the folks in Wisconsin.”

The one-day inspection period is not intimidating at all, Meyers said.

“In the real-world, if the CERFP gets called up, we aren’t going to have time to practice – we’re just going to go out and do it,” he said. “I think, if anything, this is a bit more realistic. The facility, the footprint, the setup is exactly how we’d do it in the real world.”