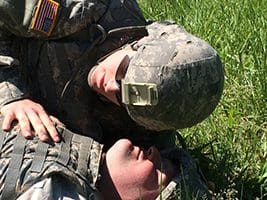 “I could not be prouder of the tremendous effort Spc. Ziegler put forth,” said Command Sgt. Maj. Bradley Shields, the Wisconsin Army National Guard’s senior enlisted advisor. “[He] was a mere handful of points away from winning the competition. His efforts speak volumes for himself, his unit, and especially his sponsor, Sgt. Talon Dumke.”

Shields said Ziegler was at or near the top of the seven competitors for the duration of the event. For his part, Ziegler said the level of competition was fairly even, so he had no idea where he stood in the standings.

“It’s a little bittersweet, actually,” Ziegler said. “I know I could have had first place, but I got second place and that’s great to say. Not many people can say that.”

To give himself time to prepare for the state and regional competitions, Ziegler cut his classload at UW-Milwaukee to four credits this semester, and is still maintaining a daily exercise regimen in case he is called to compete in Utah.

The regional competition challenged 13 Soldiers with a rigorous gauntlet testing their strength, skills and military bearing. Events included the Army Physical Fitness Test, weapon qualifications, land navigation, an obstacle course, drill and ceremony, a written essay, an appearance board, and a 12-mile road march with combat load — an M-4 rifle and 35-pound rucksack.

“I just sort of gave it my all,” Ziegler said.

The Best Warrior Competition begins at the company level — last October for Ziegler — and advances through battalion and brigade-level contests before reaching the state-wide competition. State winners participate in the regional competition in hopes of advancing to the National Guard Bureau event. Winners there will challenge the top competitors in the Army and Army Reserve for Army-wide honors.

“This is important to the Army,” said Command Sgt. Maj. Tyson Johnston of the Indiana Army National Guard, who helped orchestrate the regional Best Warrior competition. “It finds the best and brightest warriors … within our ranks, from every level of the organization. Maybe they don’t win every competition, but we identify the strong, physically and mentally — the ones who want to win.”

Ziegler said he will use the knowledge he gained to help not only himself in the future, but his fellow Soldiers. He also thanked his sponsor and unit leadership for their guidance and preparation.

“They led me in the right direction,” he said.

Spc. Evan Myers of the 120th Public Affairs Detachment contributed to this report