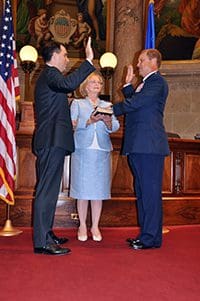 MADISON, Wis. — Gov. Scott Walker promoted Brig. Gen. Murray Hansen, the Wisconsin Air National Guard chief of staff, to his present rank during a formal ceremony May 20 in the Senate Chamber of the state capitol.

During the ceremony, Walker acknowledged that he carries uniform patches from the Wisconsin Army and Air National Guard as a reminder of the service Guard members provide at the state and federal level.

“It’s not just a job — it’s an incredibly important responsibility,” Walker said, “in many cases a responsibility that others in active duty weren’t able to fulfill the way our men and women in the Wisconsin National Guard can. We understand the importance — we know that’s why it’s so important to have great leadership.”

Maj. Gen. Don Dunbar, Wisconsin adjutant general, praised Hansen, who comes to the Wisconsin National Guard from Robbins Air Force Base in Georgia, where he served as the Air National Guard advisor to the commander of the Air Force Reserve. Hansen also has more than 27 years of total service, and served in Operations Desert Storm, Enduring Freedom and Iraqi Freedom.

“I feel like we’re cheating a little bit,” Dunbar said. “We’ve got the finest Air National Guard in the country, and now we’ve added a man of tremendous quality to our fold. It’s like the Yankees winning all those World Series and then adding Joe DiMaggio.”

Hansen downplayed the praise, recalling his days as a first lieutenant weapons system officer for a B-52 bomber during Desert Storm.

“I respectfully come before you with incredible humility, shock and awe.”

Hansen thanked Walker for his support of the National Guard, and Dunbar for his confidence in him.

“Sir, your standing in the National Guard across this nation is second to none,” Hansen said. “When a good friend of mine, who works with all 50 states and four territories, heard I was selected for this position in Wisconsin, he said, ‘Murray, you’ve landed in the very best place. The Wisconsin National Guard is a high-quality place with high-quality people,’ and I can’t agree more with that assessment.”

Hansen thanked family, friends, leaders, peers and subordinates for their support, and also gave thanks to God.

“To Team Wisconsin, and my new Guard family and fellow cheeseheads, you should know that I subscribe to Albert Einstein’s motto of not trying to become a man of success, but rather a man of value,” Hansen said. “That’s my goal — to add as much value to the team as possible during the time I’m allowed to serve.

“To Brig. Gen. Gary Ebben, I’m looking forward to working with and for you as your chief of staff,” he continued. “You have a fantastic team already assembled, and I’m honored to become a small part of what will surely be a great future.”