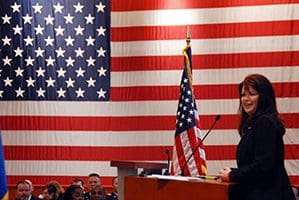 Employers and service members gathered at an awards breakfast at the Milwaukee War Memorial Center May 11, while just hours later, the CEO of Rockwell Automation, a Milwaukee-based Fortune 500 industrial automation and information solutions corporation, signed a statement of support with the Wisconsin Employer Support of the Guard and Reserve (ESGR) program.

The day’s events highlighted the important role employers play in defending the nation.

During the breakfast banquet, Col. Daniel Yenchesky, the commander of the Wisconsin Air National Guard’s 128th Air Refueling Wing, spoke about his recent deployment to the Middle East where he witnessed a fellow Airman from the Milwaukee-based 128th operating a forklift and Soldiers feverishly packing and preparing pallets around-the-clock for airdrops to Iraqi Yazidis trapped on a mountain in northwestern Iraq. The Yazidis were besieged by Islamic extremist militants and trapped on the barren mountain and cutoff from food and water.

“I’m thinking to myself, ‘this is one Airman, released by his employer to go downrange as a volunteer doing what is necessary at the most critical juncture of what we have going on in the Middle East at this time, saving lives – literally saving lives, getting food and water to people so they could eventually walk off that mountain,'” he said.

Yenchesky and others praised employers for the critical role they have played in the last 14 years of war as the National Guard and federal reserve have shouldered an increasingly heavy load in the nation’s wars in Iraq and Afghanistan.

Maj. Gen. Donald Dunbar, Wisconsin’s adjutant general, equated the support needed for a Guardsman or Reservist to effectively do their job of defending the nation to a triple-braided cord — family, community and employer.

“Nobody who’s in this room that’s an employer should think for a second that it’s just as easy as sending someone overseas,” Dunbar told the audience. “Without the support that these men and women get from you, the employer, knowing that they can serve their country, go into harm’s way and not have the burden of worrying about, ‘Will I have a job when I come home? Or will my career be taken off track because I served my country in Iraq or Afghanistan or someplace else our country needs us to go?'”

Milwaukee Mayor Tom Barrett attended the breakfast at the War Memorial Center on Milwaukee’s lakefront as well and pointed out that today’s military is an all-volunteer force, meaning the nation must continue to rely on calling up the Reserve and National Guard to do the nation’s bidding.

“Now, if you think about it, that means that the role the Reserve and the Guard plays is a much more significant role, and because of that, the role that employers play becomes far more significant as well,” Barrett said. “We need to have employers recognize how integral they are to protecting our nation’s freedom.”

He also listed 10 reasons to hire a member of the National Guard or Reserve: global perspective, on time all the time, first-class image, calm under pressure, can-do attitude, physical conditioning, understanding diversity, responsibility, professionalism and leadership.

The city of Milwaukee has produced three ESGR Freedom Award recipients — Midwest Airlines in 2000, Miller Brewing Company in 2003 and Harley-Davidson in 2004. The Freedom Award is the highest recognition given by the U.S. government to employers for their support of their Guard and Reserve employees, and according to Mike Williams, the state chair for ESGR, Wisconsin companies have earned more Freedom Awards than any other state in the country.
In fact, the state of Wisconsin was recently named one of 30 Freedom Award finalists across the country. Lt. Gov. Rebecca Kleefisch was on hand for the recognition. She too joined in the praise of employers that support service members.

“When you bless your employees who wear the uniform by allowing them the freedom to protect ours, you also bless families like mine who can sleep safely at night knowing that we are protected far from home,” she said.

Johnson recounted the story of one of his employees who he knew he could always rely on to get tough jobs done and solve complex problems. He came to find out that the employee was a Guardsman after the Guardsman nominated Pierce Manufacturing for the ESGR Patriot Award.

“These are the qualities that we need,” he said of the traits possessed by service members.

“It’s a great example of how these qualities transition to the business world and why we want to attract more Guard and Reservists, because it’s good for our business.”

Johnson said he hopes to begin a recruiting campaign to hire even more service members.

A Soldier and an Airman from the Wisconsin National Guard also received awards during the breakfast. Senior Master Sgt. William Rebholz of the 128th Air Refueling Wing, and Spc. Derrick Ziegler, of the 1st Squadron, 105th Cavalry, received the Richard I. Bong Award for exceptionally high standards of military job performance, leadership, military bearing and citizenship.

Meanwhile across town at Rockwell Automation, one of Milwaukee’s largest employers marked the day by signing an ESGR Statement of Support, an official statement that pledges a company to supporting Guard and Reserve employees and encourages them to act as advocates for employee service in the military.

“I’m proud to be here today to support our employees who serve in the Reserve and National Guard by signing the ESGR Statement of Support,” Nosbuch said. “The signing of this document also demonstrates the support of Rockwell Automation to the members of the military — both active members and veterans through our recruitment and hiring practices and ongoing support of our military members.

“The signing of this document is an opportunity for Rockwell Automation to fully recognize, honor and enforce the Unified Services Employment and Reemployment Rights Act,” he added. “By signing this Statement of Support, we are showing our appreciation of the values, leadership and unique skills service members bring to the workforce.”

Rockwell’s Military Allies and Veterans Group started nearly two years ago as one of the company’s resource groups and includes 115 members who have a military connection.