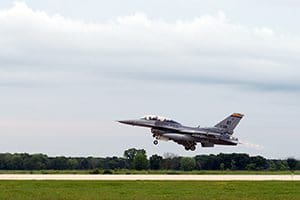 Air National Guard units from Madison, Wisconsin and Milwaukee joined others from Tulsa, Oklahoma, Duluth, Minnesota, Tucson, Arizona, and Mountain Home Air Force Base, Ohio, as well as an active duty Air Force unit from Offutt Air Force Base, Nebraska, for Northern Lightning – an annual exercise that prepares air crews for combat against a near-peer adversary.

The 2015 edition of Northern Lightning featured a first for an Air National Guard exercise as it incorporated privately contracted aircraft to simulate adversaries in the skies over Wisconsin.

More than 700 Airmen converged on Volk Field for the exercise, and with hundreds more involved remotely at sites around the country, Northern Lightning is a world-class air combat training exercise.

The exercise simulates a deployed environment and tests the ability of air crews to launch into an enemy airspace, refuel in mid-air, navigate through surface-to-air threats, neutralize enemy aircraft, conduct bombing missions and then fight back through those threats and obstacles before returning to base. The drama is currently unfolding in the Volk Field Special Activity Airspace that stretches across the skies of central Wisconsin.

But this year, instead of using Air Force F-16s and personnel to simulate the enemy, the National Guard contracted with Draken International, a privately owned company that owns tactical aircraft, to put A-4 Skyhawks into the airspace. The A-4 remains in service with some international air forces and was used extensively by the U.S. military during the Vietnam War.

The realistic scenario is enough to prepare pilots that could deploy to combat within as little as one week.

“This is about as realistic as you can get,” said. Col. Dave Romuald, the commander of Volk Field CRTC.

The training prepares these units for combat against near-peer adversaries with relatively advanced air forces in potential hotspots around the world. And with surface-to-air threat emitters spread throughout the airspace to simulate surface-to-air missiles and A-4s, Northern Lightning offers a training opportunity that cannot be replicated at home for the visiting units.

“They could leave tomorrow and be ready to go,” said Col. Matt Maniford, the commander of the International Guard Air Force Reserve Test Center in Tucson. Maniford participated in the exercise along with fellow Airmen from the 162nd Fighter Wing.

Utilizing the privately owned A-4s provides a significant cost-savings for the National Guard, which would otherwise be forced to employ its own pilots and F-16s to simulate enemy aircraft. Besides the monetary value, the contracted A-4s allow the F-16 pilots to focus on their own training and skills, rather than cannibalizing their own training time learning how to play the role of an adversary.

Plus it provides a more realistic environment than seeing familiar aircraft in the sky.

“Fighter pilots always like to see a different type of airplane in the air, so if I’m an F-16 pilot, and I come to the merge, and I see a dark A-4, it really gets the scenario going in my blood, because now it feels like I’m fighting the enemy,” Romuald said.

Lt. Col. Christopher Hansen, Volk Field’s director of operations, said the training opportunity provided by Volk Field is unmatched, and he stressed his appreciation to the local community for its support and understanding during the exercise as increased noise and military activity filled the skies.

“Because what we have here is what I would consider a national treasure,” he said of Volk Field. “To be able to get this training for all of these air crews is something that is extremely unique to west-central Wisconsin.”