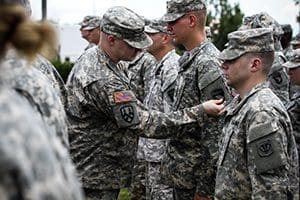 The Soldiers are now assigned to the 101st as it became the Army’s first division headquarters to convert to a multi-component unit.

The purpose of multi-component unit division headquarters is to fully integrate Army Reserve and National Guard Soldiers into the modification table of organization and equipment (MTO&E), which is designed to close operational gaps in mission command capacity, while establishing cohesive, fully capable headquarters that can execute assigned missions.

The end state is that the 101st Airborne Division headquarters completes the conversion to the Department of the Army-directed multi-component unit headquarters design and the division is trained and ready to deploy to support operational deployments. The 101st Airborne Division will also provide lessons learned and feedback setting favorable conditions for the multi-component unit headquarters conversion of the remaining Army divisions.

During the ceremony, Maj. Gen. Gary Volesky, commander, 101st Airborne Division (Air Assault) and Fort Campbell, began his speech by informing those in attendance about the proud history of the 101st.

“The Screaming Eagles are well-known in the state of Wisconsin,” Volesky said. “The roots of this division run deep in the history of the Badger state.”

“The eagle patch we proudly wear on our shoulder is directly descended from Old Abe, the mascot who was adopted by the 8th Wisconsin Volunteer Infantry Regiment during the American Civil War,” he continued. “Old Abe led that famed regiment into battle during our nation’s bloodiest conflict in history.”

The 8th Wisconsin Volunteer Infantry Regiment spent its entire military service in what was then known as the Western Theater of the American Civil War comprising Missouri, Arkansas, Tennessee, Mississippi, Louisiana and Alabama. “Old Abe” was present during all of the 8th Wisconsin’s battles and was carried into combat by a sergeant on a special perch alongside the 8th Wisconsin’s national and regimental colors. The inspiration and importance of the eagle can be traced back to the words of Confederate Gen. Sterling Price, at the Battle of Corinth in 1862.

“That bird must be captured or killed at all hazards,” Price said during the battle. “I would rather get that eagle than capture a whole brigade or a dozen battle flags.”

Volesky encouraged those in attendance saying that the future of the 101st looks bright.

“Many have tried since then to kill the spirit of our eagle, and all have — and will continue — to fail,” he said. “Our newest Soldiers will make our spirit stronger.”

“Today we are presented with an historical opportunity to reunite the state of Wisconsin with the division,” Ward said. “This is an opportunity for us to prove the flexibility of the [Division Multi-Component Unit], as we integrate seamlessly under the division commander.”

No matter the mission, or the next rendezvous with destiny, the legacy will continue to grow.

“Today, history comes full circle as I welcome you back to the 101st team,” Volesky said. “I know you will wear the Screaming Eagle patch with the same honor and dignity as the 8th Wisconsin had carrying Old Abe into battle.”