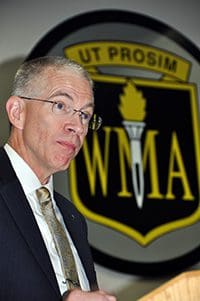 FORT MCCOY, Wis. — Two retired senior officers who were instrumental in the Wisconsin Military Academy’s transition to the 426th Regional Training Regiment were inducted into the academy’s Hall of Fame during an Oct. 10 ceremony.

Retired Brig. Gen. Scott Legwold was on the Wisconsin Military Academy staff from 1992 through 1998, and shepherded the effort to relocate the academy from the vintage buildings at Camp Williams to a new facility at Fort McCoy 20 years ago, as well as elevating the academy to a Total Army School System institution.

Retired Col. Richard Kucksdorf helped develop the field artillery training program at Wisconsin Military Academy, resulting in a robust and proficient program referred to as the Fort Sill of the North.

Legwold’s early years with the Wisconsin Military Academy were busy as he obtained full-time officer support for the Officer Candidate School instructor staff, coordinated with the state facilities directorate to plan the new schoolhouse at Fort McCoy, and also coordinated with the National Guard Bureau and regional states during the effort to regionalize Officer Candidate School and military occupation-specific noncommissioned officer courses. The academy launched regional classes for infantry, Army scout, military truck driver and field artillery. Throw in two name chances — from the Wisconsin Military Academy to the Midwest Leadership Training Brigade, and then to the 426th Regional Training Regiment — and the result is what Legwold termed a “perfect storm of events to navigate and work through every day for six years.” 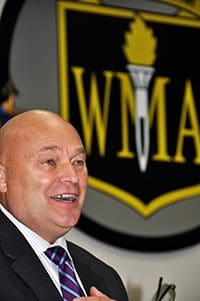 “We had a lot of resistance to change,” Legwold recalled. “There were some that didn’t want to have us go from common leadership training — training sergeants in core common tasks — to training all the [military occupation courses]. There was also resistance to things as simple as our name change — that went down hard. But a great compromise was achieved by leaving the military academy name here” as the building name.

While the 426th Regional Training Regiment was essentially a new unit in the Wisconsin Army National Guard, it inherited the lineage of the 426th Engineer Battalion from the former 32nd Infantry Division.

“It was an incredible privilege to serve here during these remarkable years, and it made me a better officer in a hundred ways,” Legwold said. “I’m in deep debt to each and every leader, peer officer and member of the staff who mentored me and made me a better leader and officer. I put everything I learned to solid use after I moved on in every later assignment in my career.”

“I personally knew a lot of people at Fort Sill,” Kucksdorf explained during the ceremony. “I never thought to ask anybody here for any help setting up what we wanted — I knew what we wanted to see and I knew who was teaching those courses. I had plenty of support down there. We packed 10 pounds in a two-pound bag. The folks I brought down came away with a very different opinion on how NCOs can be instructed and the disciplines you can instill.”

The Wisconsin Military Academy began teaching field artillery classes in 1995, and unanticipated demand resulted in multiple classes being taught consecutively, sometimes overlapping. Kucksdorf’s training and development of the teaching staff ensured that no safety incidents occurred during that first full year of courses.

Kucksdorf also helped teach Officer Candidate School classes, and acknowledged that the Wisconsin Military Academy has maintained a special place in his heart.

“You can’t really repay what you got from the WMA and OCS, so you try and do the best you can,” he said.

“For more than 50 years the Wisconsin Military Academy has been richly blessed to have had the caliber of individuals as represented by our inductees,” he said. “They are models of leadership, dedication and a ‘Soldier caring’ ethic.”