Guardsmen get green and gold salute at Lambeau 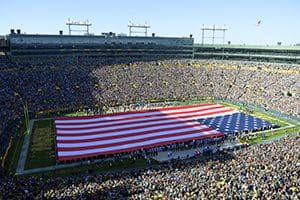 GREEN BAY, Wis. — Approximately 80 Soldiers and Airmen from the Wisconsin National Guard and dozens of other service members and veterans received a warm ovation from the Lambeau Field faithful as they unfurled a field-sized version of the American flag before the Nov. 15 Green Bay Packers game against the Detroit Lions.

The game also featured two video appearances from Soldiers with the deployed 2nd Battalion, 135th Aviation, who led Packers fans in a “Go Pack Go” chant during the first quarter as well as a rendition of “Roll Out the Barrel” later in the game. Both the flag unfurling and the video messages were part of the Packers’ and NFL’s Salute to Service campaign that took place at stadiums across the country during the week of Veterans Day.

Those asked to unfurl the American flag were part of a larger group of service members from across the armed forces and veterans of past conflicts. To present the nation’s flag in front of more than 80,000 screaming fans alongside other service members and veterans was a special experience.

But perhaps most inspiring was the warm ovation the veterans and service members received from the crowd. As the flag detail snaked its way from the Don Hutson Center through the Lambeau Field parking lots and into the stadium before the game, the group was cheered on by tailgaters. Upon entering the playing field with the flag and marching along the sidelines, the roar from the crowd steadily grew.

“It was very motivating,” said Sgt. 1st Class Peter DeVries, who serves with the Wisconsin National Guard’s 426th Regional Training Institute. “It got a lot of emotions going through your head when you’re sitting down on the field knowing that everybody is looking at you and the level of respect that was out there.”

Master Sgt. Jason Kasten, with the Wisconsin Air National Guard’s 115th Fighter Wing, had similar thoughts, noting that it was especially unique to team up with other veterans from around the state as well.

“It was a really rewarding and humbling experience to walk around that stadium and get standing ovations,” he said. “And even getting high fives from some of the fans was really cool.

“It makes you feel even more appreciated than what we already do feel,” he added. “Even when we walked the flag from the practice facility to the stadium was cool because all the people we walked by took time to stop what they were doing and thank us for our service or clap as we walked it by.”

Meanwhile watching the game from afar were the Soldiers of the West Bend, Wisconsin-based 2nd Battalion, 135th Aviation, who tuned in from Kuwait.

Midway through the first quarter, the unit’s commander, Capt. Casey Voss, appeared on the Lambeau Field video boards commanding the crowd to join him in a “Go Pack Go” chant. He was joined by the rest of the unit, which was proudly displaying its allegiance to the hometown team in front of one of its UH-60 Black Hawk helicopters.

“Roger. We read you loud and clear over here,” he told the crowd. “Thanks Packer fans. We’ll be home soon. Go Pack Go.”