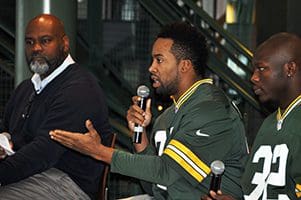 Fourth in a series

GREEN BAY, Wis. – Lambeau Field, home of the fabled Green Bay Packers, has many stories to tell of overcoming adversity and achieving greatness.

Defensive end Datone Jones, who grew up in Compton, California, spoke about visiting UCLA during a high school field trip.

“For me, the toughest thing growing up was that I never met anyone who made it out,” Jones said. “I saw this beautiful campus and it was only 30 minutes away from where I was actually at, and I was like, ‘how do I get there?'”

Jones recalled how his high school football team was split because teammates belonged to different gangs, and how teammates who had the potential to play collegiate or professional football squandered that opportunity due to gang activity.

“You guys have so many opportunities ahead of you,” Jones said. “Go be great – get an education, be a great father. There’s more to life.”

Linebacker Jayrone Elliott shared how his football abilities earned him a college scholarship, which he used to earn a degree.

“I took it as a way to make it out of the ‘hood,” Elliott said. “I’m blessed for that, and I go back to the ‘hood now to educate young brothers and young girls to make smart choices, because this world is crazy and we need people in the community to help educate people.”

Safety Chris Banjo told the cadets that he sat out of football for an entire year.

“I didn’t get drafted, my name didn’t get called – I didn’t get called to be a free agent,” Banjo said. “I wasn’t doing what I loved to do, and I told myself I was going to find a way to play football. It didn’t matter what level it was – indoor football, arena football, Canadian football – I challenged myself to take those steps. I attended numerous workouts, I had a couple of offers from indoor teams, and I continued to set goals for myself.”

Banjo said a Canadian Football League team expressed interest in him before he was hired by the Green Bay Packers.

“After my first year I was really able to reflect on it, and I really just thank God for letting me get here,” Banjo said. 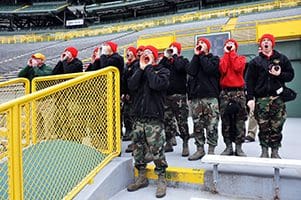 “You have to ask yourself, at the end of the day, do I want those things for me or do I want those things for the people who see me to give me validation?” Davis asked. “There can be someone who has a $10-an-hour job, no money in the bank, living paycheck to paycheck and still feel successful. I know that, because I had a $10-an-hour job, lived paycheck to paycheck, no money in the bank, and I still felt successful.”

Davis acknowledged that it’s easy to choose the street life as an impressionable youth from a dysfunctional home in a distressed environment. But education offers better opportunities.

“Only so many people are going to get an opportunity,” Davis explained, “and the only deciding factor today – unlike 100 years ago – has nothing to do with the color of your skin. Are you educated enough to do the job?”

Running back John Crockett told cadets they can set their own goals, and they will know if they have succeeded at those goals.

“It’s cut and dried – you win or you lose,” Crockett said. “Did you make the play? Did you win? You figure it out, you get the job done.”

“If you want more from yourself than others want from you, that’s your internal motivation that will help you meet your expectations,” Davis added. “Just expect more of yourselves than anyone else expects of you and you’ll be just fine.”

Kevin Greenwood, Challenge Academy director, said the field trip to Lambeau Field was a fantastic opportunity to reinforce what the academy has emphasized over the past five months.

“We’ve talked about character, we’ve talked about integrity, honor and commitment,” Greenwood said. “Today really validates that to the cadets because [they] hear it from someone other than the staff – from individuals who have been in the same situation the cadets were in. It gives them hope they can be successful in whatever they decide to do.”

“They were telling us how to be successful, but not really in concrete terms – more abstract,” Mendoza said. “They told us how to view success and how it’s not based on what others think, it’s based on what you think of yourself.”

Mendoza enrolled in Challenge Academy once he realized he needed to make a change in his life.

“Where I was going wasn’t working,” he said. “I was getting in trouble once a week – there was always something popping up from choices I made that affected me negatively. [Challenge Academy] made me think more about my future, because before I didn’t care.”

Cadet Johnathan Walker, a Nevada resident enrolled in the Wisconsin Challenge Academy, might not be a Packers fan but appreciated what they had to say. He related to their comments about coming out of bad neighborhoods and using athletics as a positive motivator.

“That really made my mind set on what I want to do, and how I have to keep my paths straight and my mind occupied on my goals,” Walker said, adding that he wants to join the Marines.

“To understand what they went through and how it’s similar to what I went through, and to know that they could do something so great and become so successful, is amazing,” she said. “I want the exact same thing – but not with football.”

Dutton said she wants to become a police officer and join the Army. 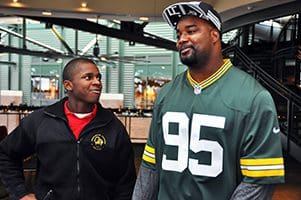 Cadet Trevon Haynes of Milwaukee appeared to connect with Jones, who asked him to sing a Christmas song for a local television news crew. Haynes spoke about how Challenge Academy has helped him.

“My problem was I had anger problems,” Haynes explained. “Going through the Challenge Academy, I can honestly say, tested my anger problems and helped me be better than I was. They teach you that you will have to go through trials and tribulations, but it’s not the way you go through it but the way you respond. If it wasn’t for the Challenge Academy I wouldn’t be as confident as I am today, or as patient as I am today.”

Haynes plans to return to high school to earn his diploma, and then earn a criminal justice degree to become a police officer.

“Have a plan and stick to it,” he said. “Don’t fall back to your old ways. I have my future set and I’m not going back – I’m going to be successful.”