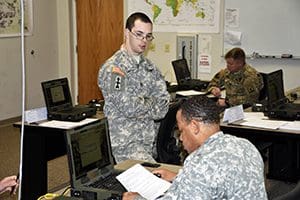 The RTI hosted the Army’s first-ever course for the new 13J military occupation specialty Jan. 3-23, which merged the fire direction and control occupations of both cannons (13D) and rocket systems (13P) into one integrated MOS.

The 13J course taught students how to process missions for both cannons and rockets, which requires students to receive information from forward observers and process that information into data that the cannons or rockets can use to fire. Ultimately 11 students from around the country, including three from the Wisconsin Army National Guard, will graduate as the first nationwide to have completed the course.

Staff Sgt. Nicole Mayberry, currently a supply specialist in the Wisconsin Army National Guard’s 1158th Transportation Company in Black River Falls, Wisconsin, will become the first female Soldier to complete the 13J course. The Army’s field artillery branch and other combat arms branches had long been closed to women until recent Department of Defense changes lifted restrictions on women serving in roles such as combat engineer and in the artillery. Defense Secretary Ashton Carter subsequently declared all military jobs and units open to women without exception in December 2015.

Mayberry hopes to move to a field artillery unit sometime in the next few years and completing the 13J school will make that transition easier someday. Getting qualified in a field artillery MOS has long been one of her goals. When she first enlisted in 2005, she was assigned to the 426th as a supply specialist. In 2008, the artillery school at the 426th needed some additional help for a live-fire mission and asked her if she’d like to participate. After assisting some of the 13Ds with some fire mission processing, Mayberry was hooked and took advantage of every opportunity to do live-fire missions with the unit.

“I tried to take advantage of being surrounded by all of these instructors and so much knowledge and information and just soak up as much as I could,” she said.

She eventually moved over to the 1158th, but with the support of her command to receive the 13J training, she aims to work her way into a field artillery unit soon. She hopes that someday she will be one of the non-commissioned officers leading and mentoring other young female field artillery Soldiers.

“That’s one of the reasons why it is so important to me,” she said. “I think that if they’re going to enlist high school students into combat arms units that there should be some females somewhere in their chain of command and some NCO mentorship in there.”

She will have a wealth of knowledge from which to draw, if the initial feedback from students about the first 13J course are any indication. Mayberry and others heaped praise on the RTI’s course instruction and subject-matter expertise.

“It’s excellent,” Mayberry said of the course. “I had prior knowledge of a lot of the stuff that we’re doing based on the live-fires I had gone on, but I’ve gone to a lot of schools and to a variety of schools, and this is the most difficult course I’ve been to as far as the content and the exams. It’s really challenging and really excellent instruction.”

Others in the course, which had National Guard and Army Reserve students from the Wisconsin Army National Guard, Michigan, Texas, Indiana, Arkansas, Florida, Texas and Georgia shared a similar sentiment.

“This has been the most informative course I’ve ever taken,” he said. “It’s been that challenging for me.” 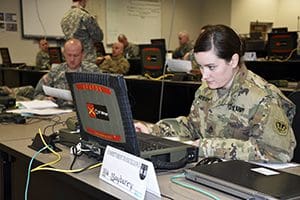 He said the sheer volume of information made the course difficult, but the 426th’s instructors were very skilled in presenting it and having all aspects of the course in the same building at the Wisconsin Military Academy at Fort McCoy allowed him to focus on what he needed to accomplish.

Koutnik serves alongside fellow classmate Sgt. Steven Eckels in Battery A, 1st Battalion, 121st Field Artillery, and they deployed to Afghanistan together in 2014-15 as one of the first National Guard field artillery batteries to conduct a fire mission in Afghanistan. Their 121st brethren became the first on a 2013 deployment.

“Even though the coursework is harder than normal, having the instructors that we do…they’re top notch,” he said.

Both Soldiers are looking forward to bringing the skills they learned at Fort McCoy back to their unit where they will work with other fire direction specialists who have worked with only rockets for their entire career. Now, they will be expected to work across multiple systems.

First Sgt. Micheal Seefeld, one of the National Guard’s subject-matter experts in field artillery, said it was an honor for the Army’s field artillery branch, headquartered at Fort Sill, Oklahoma, to select the institution out of seven others nationwide to spearhead the training. The 426th has built a strong reputation as an institution of excellence in the field artillery community.

The Army will implement the new MOS into field artillery units over the course of the next few years. Staff Sgt. Adam Schwartzkopf and Staff Sgt. Ricardo Perez served as instructors for the course. The two Wisconsin Army National Guardsmen were humbled and honored to be the first to teach the 13J class.

They received the course content from Fort Sill, but since they were the first to teach the class, they took diligent notes and annotated critiques and lessons-learned that they will provide as feedback to Fort Sill for implementation and dissemination to 13J classes at other field artillery schools and training institutions around the country.

“It just goes to show all the hard work that goes on here, the quality of the instruction, the professionalism that comes in and out of this building not only from the staff, but what students expect when they come here,” Perez said of the 426th. “That says a lot.”

Schwartzkopf said the RTI’s professionalism is responsible for the good reputation the organization has built for quality instruction.