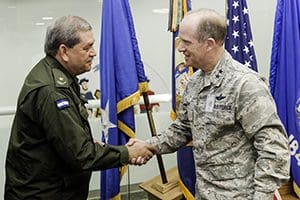 A delegation of senior officers from the Nicaraguan military visited with senior Wisconsin National Guard leaders and toured the state’s military facilities Feb. 8-11.

The Wisconsin National Guard hosted the delegation as part of the National Guard Bureau’s State Partnership Program, and the two entities found common ground when it came to serving their respective citizenries in times of domestic emergency. 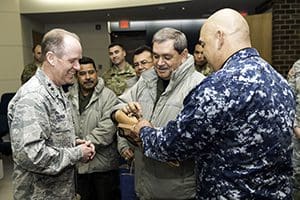 Nicaragua’s military prepares for floods, hurricanes, earthquakes and other phenomena unique to Central America, whereas the Wisconsin National Guard trains to respond to tornadoes, snowstorms, flooding, wildfires, civil disturbances and other emergencies. While the various emergency scenarios Nicaragua and Wisconsin each could face are different, the process they use to plan, prepare and respond has parallels. Both groups saw similarities in how the other plans, trains and prepares to serve their fellow citizens.

Through a translator, Brig. Gen. Rodriguez said he was very impressed with how the Wisconsin Guard plans for both foreseeable and unforeseeable events and drew parallels to Nicaragua’s humanitarian and rescue unit, which is specially trained to assist in domestic emergencies. 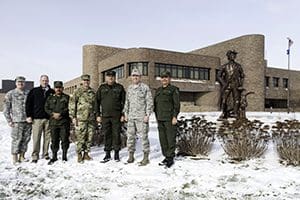 Lt. Col. Tim Covington, the director of domestic operations for the Wisconsin National Guard recalled touring the humanitarian and rescue unit on a previous State Partnership Program visit to Nicaragua.

“I could see your design, your structure, your capacity to be able to respond to those types of emergencies,” he said. “There are a lot of similarities and ways we can benefit from future training opportunities.”

Covington explained the unique dual-status mission of the National Guard and how it can serve in a federal capacity as the primary combat reserve of the Army and Air Force as well as in its state role as the first military responder in the homeland in the event of domestic emergency.

The Nicaraguan delegation heard from Lt. Col. Lauri Hrovatin, the director of the Wisconsin National Guard’s counterdrug program, where the group discussed the larger war on drugs and how the illicit drug trade in each location affected the other. They also toured the state’s emergency operations center as well as the 1st Battalion, 147th Aviation Regiment’s flight facility in Madison before taking a tour of the state capitol building and the Wisconsin Veterans Museum. 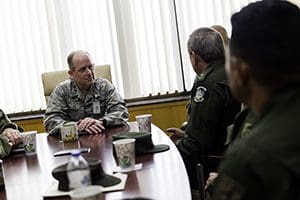 They spent another day touring the Wisconsin Military Academy and medical simulation training center at Fort McCoy, Wisconsin before travelling to the Regional All-Climate Training Center at Volk Field, where they got a first-hand look at the state’s premiere domestic emergency training capabilities.

The visit proved meaningful for all parties.

“We appreciate both the opportunities when we host you in Wisconsin and the times when we have been your guests in Nicaragua,” Dunbar added. “To get to know and share best practices, learn from each other and continue to build friendships for years to come.”

Dunbar reiterated how the Guard’s role as the nation’s first military responder here at home paralleled the mission of Nicaragua’s humanitarian and rescue unit.

“We have 10,000 Soldiers and Airmen in Wisconsin, and much like you described with your humanitarian unit, we’re prepared as well to go and respond to floods and tornadoes or whatever might come our way.”

Rodrigues expressed his gratitude to Dunbar for the partnership built between Wisconsin and Nicaragua saying that the their two organizations had “built a bridge of cooperation,” and looked forward to strengthening the relationship in the future.

He pointed out that since Nicaragua established its humanitarian and rescue unit in 2010, the Wisconsin National Guard has assisted in its planning, training and evolution.

Likewise, the Wisconsin National Guard has learned and benefited greatly from its Nicaraguan counterparts through sharing experiences, best practices and lessons learned in the domestic operations realm, according to senior leaders.