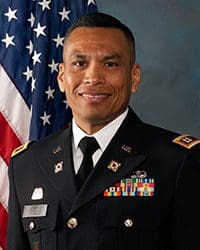 Capt. Ubaldo Nieves, who was an Officer Candidate School instructor at the Wisconsin Army National Guard’s 426th Regional Training Regiment (RTI) at Fort McCoy, Wisconsin, was one of seven Army National Guard officers to receive the prestigious leadership award for company-grade officers during a May 31 ceremony at the Pentagon.

“I am very humbled by this recognition,” Nieves said. “This really is a reflection of the great team I had the honor of leading. Without the great Soldiers we have the privilege of leading, the Wisconsin Army National Guard would not be the great force multiplier that it is today — this award reflects the great people that we have the honor of serving with.”

Originally from Escondido, California, Nieves enlisted in the U.S. Marine Corps as a rifleman in 1993. He attended officer candidate school at the 426th RTI in 2006, and was commissioned as a quartermaster officer — logistics — the following year.

Award candidates are judged according to leadership that exemplifies the ideals of duty, honor and country; their ability to influence others to accomplish the mission by providing purpose, direction and motivation; technical and tactical competence; commitment to the Army values of loyalty, duty, respect, selfless service, honor, integrity and personal courage; their ability to develop cohesive teams that anticipate what needs to be done and take initiative within the scope of the commander’s intent; and intangible leadership qualities such as people skills, interpersonal communication skills and an effective leadership climate.

Nieves won’t have much time to savor the award, however — he is set to begin two years at the U.S. Embassy in Managua, Nicaragua, as the bilateral affairs officer in the Security Cooperation Office as part of the State Partnership Program Wisconsin has with Nicaragua.

“I look forward to serving not only our country in this capacity, but also the great state of Wisconsin,” Nieves said.