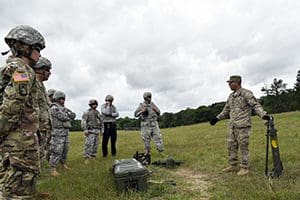 Fourteen active duty Soldiers and two National Guard Soldiers will graduate July 30 from their Advanced Leader Course (ALC) for cannon crewmembers, or 13Bs. ALC is part of the Army’s noncommissioned officer education system for Soldiers seeking the skills and qualifications necessary for promotion to the rank of staff sergeant.

Fort Sill, Oklahoma, has traditionally hosted ALC for active duty field artillery Soldiers, but Wisconsin’s 426th RTI is at the forefront of a recent shift toward the idea of a One Army School System where Soldiers from each component of the Army — active duty, National Guard, and Reserve — can train at school’s nationwide, no matter the component. 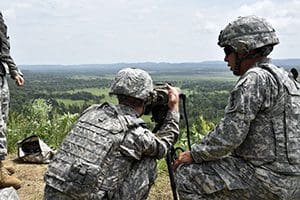 In the case of the 426th RTI’s 13B ALC course, active duty Soldiers used Guard facilities, Guard instructors and Guard equipment for their training. The 426th has hosted active component Soldiers in its courses before, but only a handful of Soldiers at a time that were mixed into National Guard courses. This iteration was the RTI’s first meant specifically for active duty Soldiers, and senior leaders hope this idea becomes commonplace in the years ahead.

During a July 13 visit to Fort McCoy to observe the 13B ALC course, Col. Stephen Maranian, the commandant of the Army’s Field Artillery School, told the students and instructors that he hoped the initiative would continue to grow and that RTIs like the 426th would begin to train more and more Soldiers from all components of the Army.

“There is no difference,” he said of the instruction at the 426th versus the active duty course. “We’re all wearing the same thing over our left pocket, which is ‘U.S. Army.’ It doesn’t say ‘Army National Guard’ or ‘Active Army.’ 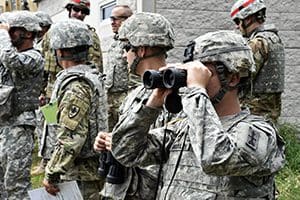 “I appreciate the teamwork and the cooperation,” he added.

Command Sgt. Maj. Berk Parsons, the command sergeant major for the field artillery, agreed while acknowledging that some in the active component were initially skeptical that the National Guard could offer the same quality and level of instruction as active duty courses.

“That’s one of the things that I always get across the active component, ‘Well, coming in I wasn’t sure,’” Parsons said. “Now they understand that the POI (program of instruction) and the quality of instruction is exactly the same, because it all comes from the same source.”

An added benefit of the Guard’s program is that it offers a condensed timeline. The course at the 426th RTI runs seven days a week from July 7-30, versus the active duty course, which stretches over five weeks due to off days on the weekends.

“Everyone that I talked to here today was just blown away by the training so far,” he said. “They think it’s an awesome program. The challenge that I gave them is to go back to their units and talk it up, because we need to break down those pre-conceived notions and get a higher throughput, which makes us all better.” 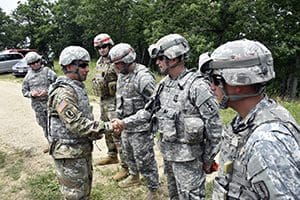 The course, which tests Soldiers on cannon crewmember skills on the three weapons systems the 426th owns — the M777 155-mm Howitzer, the M119 105-mm Howitzer, and the M109A6 Paladin self-propelled 155-mm Howitzer — received positive reviews from the Soldiers as well.

“It’s great,” said Sgt. Keegan Dahlhauser, of the 101st Airborne Division’s Battery A, 1st Battalion, 320th Field Artillery Regiment, 2nd Brigade Combat Team at Fort Campbell, Kentucky. “When I first saw it, I didn’t think that these instructors were going to be as knowledgeable as they are.

“It’s no different,” he added. “We’re getting the same amount of instruction in a more condensed time period. I like it. I’d rather work my weekends and get back home faster.”

“I like it here, because they implement the Army standard, and they’re training to the standard, not for time,” he said. “So as much as it’s fast-paced, the fact of the matter is that as E-5s in this class, we’re training to a standard the Army puts out.”

Mendiola admits to being skeptical when he first heard he was coming to a National Guard-led course, but with the quality of the Wisconsin National Guard instructors, the class has exceeded all expectations.

“These guys are the best of the best, and there’s a reason why they’re teaching us this class,” he said.

Lt. Col. Eric Beuerman, the commander of the RTI’s field artillery training battalion, called the visit a great opportunity to prove that the One Army School System works.

“It’s bigger than just us being able to do it in the field artillery,” he said. “They want to be able to show that active or any component Soldiers are able to come to the National Guard and get the same training. That’s why it’s kind of a big deal, because we’re proving that the One Army School System does work.”

By 2019, Beuerman said, the number of quotas for active duty Soldiers to train at the 426th is expected grow exponentially.

Outside of Fort Sill, Wisconsin’s RTI joins Pennsylvania’s as the only schools nationwide offering the course.

“We have the credibility,” Beuerman said. “We’re a very strong program. We always have great end-of-course critiques, and our reputation has something to do with it. But objectively, we have the facilities, the capacity, and the equipment to do it.”

The visitors got a first-hand look at the vast training resources, capabilities and subject-matter expertise the 426th offers, as Red Arrow Soldiers guided the F-16s in toward a mock enemy convoy for bomb and strafing runs at Fort McCoy.

The four-day JFO course aims to re-certify Soldiers who are already qualified in the skill but also familiarize other Soldiers preparing to go to the Army’s full JFO qualification course. JFOs are trained to call in fire support from each branch of the military.

“The idea with this program is that we’re going to keep JFOs re-certified, which they have to do every six months,” Staff Sgt. James Spude, a JFO instructor with the 426th said. “But we’re also going to prep students that are going to go to those schools in the Wisconsin National Guard.”

Once again, the 426th’s instructors received high praise from their students.

“They’re really cool,” said Spc. Christopher Biddulth, a JFO assigned to Headquarters and Headquarters Company, 32nd Infantry Brigade Combat Team. “They really put the time in and get up next to us and help us if we need it.”

Beuerman could not be more proud of the work the 426th RTI continues to do.

“They are proud of what they do, and they take it very seriously,” he said. “They understand that they are role models and subject-matter experts, and they’re influencing these students as they come through and as they go on. They know that their credibility is on the line as well, and they’re not going to let that go.”

In the future, Beuerman hopes to see students from other states in the region coming to Fort McCoy for JFO re-certification and familiarization.