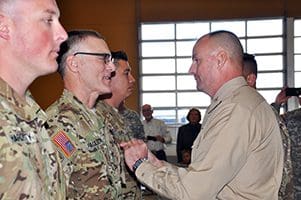 A retired Wisconsin Army National Guard helicopter pilot received an Air Medal with “V” device for valor during a Nov. 6 ceremony in Santa Fe, New Mexico for his actions as part of a Black Hawk medevac crew that saved the life of a critically wounded Marine — twice — in Afghanistan. 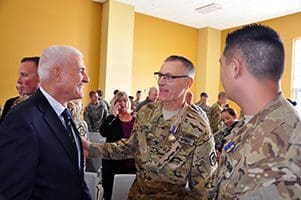 Paulson had spent almost his entire military career, spanning nearly four decades, “on the flight line” as an active pilot, and had served as the Wisconsin Army National Guard’s safety aviation officer as well as chairman of the National Guard Bureau’s safety aviation officer advisory council. He spent six years commanding the Wisconsin Army National Guard’s medevac unit in West Bend, Wisconsin. But while he had helped deploy other Soldiers for 10 years, his rank prevented him from deploying with most units.

“I thought it would be a hole in my soul if I didn’t get to go on the other side of that equation and be the guy deploying,” Paulson explained.

He approached Maj. Gen. Don Dunbar and Brig. Gen. Mark Anderson, Wisconsin’s adjutant general and deputy adjutant general for Army, respectively, about converting from the rank of colonel to that of warrant officer in order to deploy to Afghanistan with a medevac platoon from the Minnesota Army National Guard. That platoon would link up with a medevac company in the New Mexico Army National Guard — reflecting the Army’s plan to enlarge medevac units from 12 to 15 helicopters. 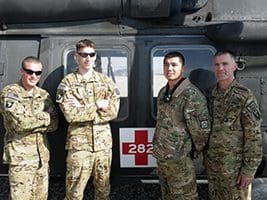 Paulson deployed to Afghanistan with the New Mexico unit in June 2011, and was stationed at Forward Operating Base (FOB) Edinburgh in northern Helmand Province, the busiest of four FOBs the battalion was assigned to, supporting Marines during the troop surge in Afghanistan.

“When the Marines were busy, we were busy,” said Col. Chris Holland, who commanded the battalion during that deployment. “During those 10 months, we did 1,451 medevac missions and rescued over 1,800 battlefield casualties from very dangerous places — more than any other unit in the Army, active or reserve component, during that time frame.”

Paulson estimated he took part in 172 missions during the deployment, 71 during a two-month period.

“It was a very kinetic area north of Marjah and the northern part of Helmand Province, and that’s where FOB Edinburgh was,” Paulson said. 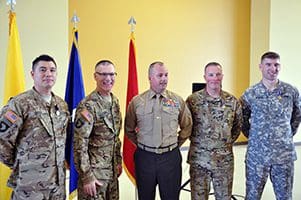 On Jan. 12, 2012, Paulson and the rest of the crew — New Mexico National Guard Soldiers Maj. Kevin Doo, commanding pilot; Staff Sgt. Robert Hardisty, crew chief; and Chief Warrant Officer 1 Mark Edens, flight medic — had already completed one mission at 3 p.m. and were preparing to assume primary medevac duty when they learned of a mission to pick up a small child with gunshot wounds in the back. The girl was to be brought by ground transport to a Marine command post, but the Taliban was attacking that post with rocket-propelled grenades (RPGs) and small-arms fire.

Paulson said the crew heard that a patient had unexploded ordnance embedded in their body and assumed that it was the small girl. Instead, four Marines approached the medevac helicopter with a makeshift litter carrying Cpl. Winder Perez, who had an unexploded 15-inch rocket-propelled grenade embedded in his leg.

According to Col. John Schafer, the Regimental Combat Team 6 commander in charge of the Marine brigade-sized element on the ground, the RPG skipped off the ground — bending the detonation device up — hit Perez’s femur and came out his backside. Immediately, ground lifesavers tended to him and called in medevac. While still in a gunfight on the ground, they rapidly moved to an area suitable to fly the helicopter in, secured it to the best of their ability, and popped smoke for the aircraft to come in and load Perez. 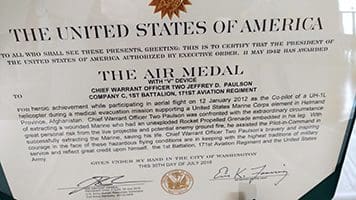 “We take pride in how fast we can respond, but it takes time to start up the helicopter and coordinate a mission with headquarters,” Holland explained. “Had they gone through the normal process, it would have taken a half hour to get there and this mission would have probably not happened. In addition, approval authorities would have labeled it as an extreme high-risk mission which would have required approval from a general officer, possibly taking hours to get, and Perez only had minutes to live.”

Holland said no one would have questioned had the crew elected not to do the mission. Military guidelines suggest no participation because the live ordnance imposed a danger to the medevac crew and everyone around. When Doo became aware of the situation, he looked at his fellow crewmembers and asked for their verbal commitment to medevac the wounded Marine. They knew that moving Perez meant moving the RPG, which could explode at any second and everyone aboard could die.

“Within seconds, they all gave me their absolute commitment to bring him on board and try to save the Marine’s life,” Doo said. “This is what we train for and this is what we do.”

Paulson said none of the crew had much time to debate.

“You revert back to your training and the Warrior Ethos — you never leave a fallen comrade,” Paulson said. “We didn’t spend any time arguing about it.”

At 4 p.m., Paulson switched from being pilot-in-command to co-pilot, so he flew the helicopter with Perez — and the unexploded ordnance — on board. The crew knew that every second counted, so they also made the decision to fly directly and smoothly, forfeiting their normal flight defensive profile, all while escort aircraft were instructed to fly further away because of the increased danger.

“I just flew as smoothly as possible and we contacted the tower [at Edinburgh] and told them we were coming in with an unexploded ordnance,” Paulson recalled. As the air traffic tower was built into the barrier wall bordering the landing area, the tower personnel evacuated.

“So I said, ‘Wait a minute — you took an unexploded ordnance stuck in someone’s body on one of my helicopters?’” Holland asked Doo, who responded with a “Yes, sir.”

“Capt. Doo, I don’t know if I should nominate you for a Distinguished Flying Cross or court martial you.”

The crew made it to FOB Edinburgh in 24 minutes where an explosive ordnance detonation team awaited their arrival and took the patient to a safe zone between Hesco barriers away from the main medical facilities.

“I guess I must have done well enough — somebody said that was the smoothest landing they had ever seen,” Paulson said. “That was one good reason to have an old pilot along, I guess.”

Lt. Cmdr. James Genarri, from the surgical team, immediately saw the life threatening wounds and decided it was best to pull the RPG out instead of cutting up Perez’s leg around it. Working with Staff Sgt. Ben Summerfield of the EOD team, they gave four hard tugs, removing the RPG and the EOD team disposed of it. They closed up Perez’s wounds and put him back on the helicopter to transport him to FOB Bastion for further care.

While the medical team was working to remove the RPG and stabilize Perez, Paulson and the rest of the air crew kept doing missions. They went back to the command post to pick up the wounded little girl, who never arrived. Released from that mission, they flew to FOB Bastion to pick up blood supplies and returned to FOB Edinburgh. When they arrived, Perez was ready to be evacuated to the field hospital at FOB Bastion.

Ten minutes into the 40-minute flight, complications with the ventilator meant medics had to feed Perez oxygen and bring him back to stable condition. All that work paid off as Perez survived. The medevac team helped save the corporal’s life not once, but twice, on the same day.

Holland spoke with the Marine battalion’s executive officer, who said the flight crew deserved the Distinguished Flying Cross. Gennari said he had no doubt Perez would have died if the flight crew had not evacuated him from the battlefield.

Holland put the crew in for the Air Medal award. He thanked retired Marine Col. Allen Weh for coordinating with U.S. Sen. John McCain to get the awards approved.

The Air Medal is awarded for meritorious achievement while participating in aerial flight, and is just below the Meritorious Service Medal in order of precedence. The “V” device is awarded by all services where heroism in combat was involved on an individual mission and is worn solely to denote “participation in acts of heroism involving conflict with an armed enemy.”

Paulson was humble about the award, and appreciated the effort behind getting Congress involved in approving the award.

“This certainly was unique in that it’s not every day a guy catches an RPG in the leg, let alone taking him in your aircraft,” Paulson observed. “It’s certainly an honor, one that I appreciate very much.”

Perez survived his injuries and endured 30 surgeries, and was medically retired from the military. He studied culinary arts during physical therapy, was married this past spring and opened his own restaurant. In spite of his considerable injuries, Perez runs frequently.

“These guys were willing to make on-the-spot calls, take a chance to do the right thing and not worry about bureaucracy or protocols,” Schafer said. “The golden hour is what it is all about, getting our wounded to care when they need it most and guys like your Soldiers here doing a great thing that allows Marines and Soldiers to do our jobs. They put their backs on the line as well to get us out when needed, so I salute you. Semper Fidelis.”

Paulson said he would be forever grateful to Dunbar and Anderson for allowing him to deploy.

“This was kind of the icing on the cake to actually go and not just talk about it hypothetically,” he said, “but to go live it and execute it as a line pilot.”