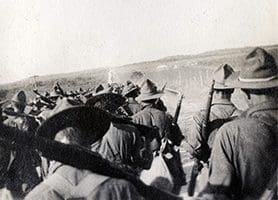 One hundred years ago Wisconsin National Guard troops were closing out their role defending the nation’s southern border during the Mexican Border Crisis of 1916. Their work set the state for their entry into World War I – and the beginning of the 32nd Infantry Division’s rich history.

The 32nd Division took the insignia of a red arrow piercing a red line to signify their four offensive campaigns in France – all successful. But not long before, the 32nd Division Soldiers belonged to unrelated and untested units in Wisconsin and Michigan.

Then in June 1916, Wisconsin mustered approximately 4,000 Guard Soldiers – three infantry regiments, one cavalry troop, one field artillery battery and one field hospital – at the Wisconsin Military Reservation near Camp Douglas, Wisconsin on June 22, 1916 and deployed to Camp Wilson, near San Antonio, Texas. The Wisconsin Guardsmen were among about 112,000 National Guard members from all across the country to defend the Mexican border while active Army troops, led by Brig. Gen. John “Black Jack” Pershing, hunted Francisco “Pancho” Villa through northern and central Mexico.

Villa, a Mexican revolutionary, had raided the border town of Columbus, New Mexico March 8-9, killing 18 Americans, and the subsequent U.S. military’s punitive expedition was spread too thin to protect the border as well as its supply train into Mexico.

Villa was not the U.S. military’s only threat during the punitive expedition. The Mexican government considered Pershing’s expedition a violation of national sovereignty, and Mexican president Venustiano Carranza threatened war if additional U.S. troops crossed the border. Also, Mexican and Native American bandits had for decades routinely harassed civilian settlements across the U.S. border.

Tensions along the border began to subside, and National Guard troops began to return to their home states. Wisconsin’s Battery A, 1st Field Artillery and Troop A, 1st Cavalry returned to the state in October 1916, followed by the 3rd Infantry Regiment on Dec. 14. The Wisconsin National Guard’s field hospital and 1st Infantry returned in January 1917, the 2nd Infantry in February, and Troop B, 1st Cavalry – which replaced Troop A in October – returned to Wisconsin in early March.

Carranza also stepped up his own efforts to hunt down Villa, a one-time revolutionary ally. In January 1917, Mexican military forces defeated Villa at Jimenez, and the U.S. punitive expedition left Mexico by Feb. 5.

Meanwhile, World War I still blazed in Europe. The German Empire, sandwiched between the Russian Empire on its east and France on its west, was waging submarine warfare against ocean shipping to starve Britain of vital imports and drive it from the conflict. U.S. vessels were occasionally targeted by German submarines, raising the likelihood that it would join Britain, France and Russia in the war against the Central Powers.

“The Germans were promising, if victory was achieved, [Mexico] would get back all the territory it lost in the Mexican War,” said Dr. Julius Ruff, a history professor at Marquette University in Milwaukee. “What the Germans were trying to do was milk the [Mexican border crisis], exploit that situation. By the time Zimmermann sends the actual telegram, the [President Woodrow] Wilson administration has pretty much paved things over with the Mexican president and relations have been restored to a more or less polite basis. But certainly what the Germans sought to exploit in the Zimmermann telegram was anti-American sentiment in Mexico.

“There probably would have been some support in Mexico for a war against the United States.”

Unbeknownst to Germany, Britain had – almost from the beginning of the world war – been intercepting and decoding German telegrams. Making the United States aware of the contents of the Zimmermann telegram without alerting Germany that its codes had been broken was a dilemma for British intelligence personnel. They finally shared the information with the Wilson administration in March 1917 – ironically, when the last Wisconsin National Guard unit returned from the Mexican border, and when another Wisconsin National Guard unit was serving on federal status to guard infrastructure across Wisconsin.