The Challenge Academy reshapes the lives of at-risk 16- to 18-year-olds. It uses a structured, military-style environment and state-certified teachers and counselors to build cadets’ academic abilities, character, self-confidence, and personal discipline. The Green Bay Packers have had players meet with cadets for several years, both at the Fort McCoy campus as well as at Lambeau Field.

“I have a couple of family members who have kind of lost their way and are slowly getting to where these kids are today,” said linebacker Blake Martinez. “But it’s taken them eight to 10 years to get to that point – whereas you can see these kids are able to step in here and in five months turn into this young gentlemen right here,” referring to Riley Clark, a cadet command sergeant major. “It’s unreal to think that he was a ‘bad kid’ and see where he is right now, see what a bright future he has in front of him.”

The Packers arrived at Fort McCoy via Black Hawk helicopter, toured the Challenge Academy campus and ate lunch with cadets before answering questions in a class assembly about resilience and perseverance. 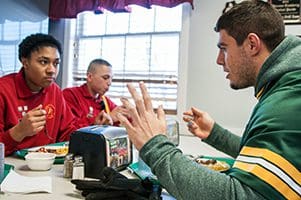 “We still have our short-term and long-term goals,” added defensive back Micah Hyde. “I’m glad I made it here [into the NFL] but that’s not even close to being the end.

“It’s safe to say where I grew up I wasn’t always the fastest, the strongest, the most athletic,” Hyde continued, “but at the end of the day I did what I needed to do to make it to college or the NFL. I just always felt like the guy in front of me might be faster, but if I take the right angle I can be faster than him, or if he’s stronger than me I’m not going to be put in that position where he can use that strength. It’s things like that I’ve learned along the way. And it’s gotten me here today.”

Quarterback Brett Hundley said doing what others don’t want to do can set one apart from the crowd.

“When everyone wants to go out and party, sometimes you’ve got to be studying,” Hundley said. When everybody else wants to sleep during double-days in college, you’ve got to take that time to go over your playbook. It’s a lot of small things that add up to a bigger goal.”

All three Packers said they relied on their faith, family and friends to cope with stress. They emphasized being around the right people to succeed.

“I think you are who you surround yourself with,” Hyde said. “In high school, all my friends went to college, and I didn’t want to be that only guy who didn’t go to college. When I was in college I surrounded myself with people that were getting looked at by the NFL, and whatever they did, I did. Work out a little bit harder, study a little bit harder – I did that because I wanted to get in the NFL. Here I am today, surrounded by these guys who work hard, they study hard.”

The Packers praised the cadets for making it to the end of a five-month residential course that taught and reinforced core values and making good choices. 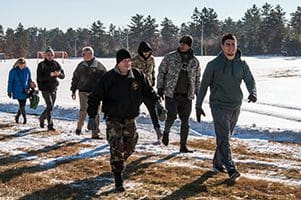 “I think what you guys have here is awesome,” Hundley said. “To volunteer to do this type of program shows a lot and means a lot. I would just say, don’t quit. A lot of times in life, there’s a lot of failure before there is success. The reason we’re sitting up here today is because we didn’t quit. Whatever you want to do in life, stay true to it.”

““This is the first step,” Martinez added. “What you guys did here, the sacrifices you’ve made to be here these five months – just hearing what you go through each day – is tremendous. As long as you keep doing what you’ve been taught here, make sure you keep making those right lifestyle choices when you leave here and you’re back in that environment with your friends.”

“It feels really great [to have Packers visit] and kind of motivational, hearing from their background,” Clark said. “They’ve had failures but the three of them never quit and that’s how they got where they are. That helps me motivate myself.”