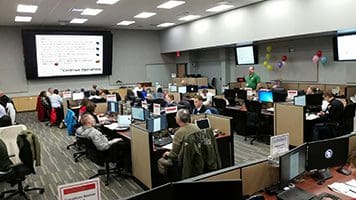 “When disaster strikes, the number one priority during an emergency is to save lives,” Lt. Governor Kleefisch said. “If the scale of a disaster exceeds the response capabilities of a local community, Wisconsinites can rest assure that state government has state-of-the-art resources to coordinate intergovernmental and interagency response efforts through the new State Emergency Operations Center.”

Construction of the $9.2 million facility began in November 2014. It replaces the previous SEOC and JOC at the Wisconsin Department of Military Affairs, which was formed out of an improvised space that was too small for current operating requirements, with a layout more conducive to collaboration and communication across partner agencies, and enhanced communications tools.

It also includes the future home to the 21-Soldier contingent of the Wisconsin National Guard’s Cyber Protection Team and the 10-person Defensive Cyber Operations Element – a team dedicated to defensive cyber operations and a resource for cyber assistance, guidance, and support to state, local and tribal governments as well as critical utilities infrastructure organizations in Wisconsin.