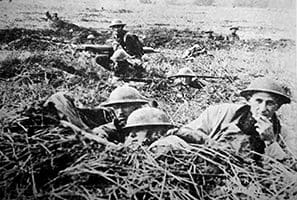 The Wisconsin National Guard announced plans to commemorate the 100-year anniversary of the 32nd Division’s service in World War I and honor its historic legacy.

“We’re going to tell the 32nd Division’s story from the perspective of its first Soldiers,” said Lt. Col. Gary Thompson, the Wisconsin Guard’s director of public affairs. Dubbed the “Dawn of the Red Arrow,” the two-year campaign is starting now and will continue through the 100th anniversary of the end of World War I.

The dawn of the Red Arrow coincides with the dawn of the National Guard in the modern era. The World War I experience would lead to future changes that created the current legal framework for today’s National Guard as an operational force within the total Army structure.

The campaign aims to capture the history of the famed 32nd “Red Arrow” Division’s formation and its subsequent service in the First World War. “We are their legacy. Taking time to remember their struggles, their sacrifice, and their triumphs illuminates how we became what we are today — always ready, always there,” Thompson said. 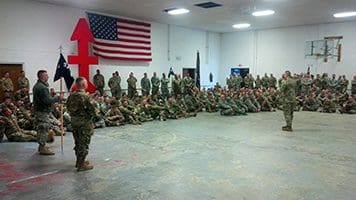 The Wisconsin National Guard’s public affairs office will release a series of video vignettes and hopes to produce a full-length documentary film. The videos will accompany feature articles released in conjunction with key dates surrounding the 32nd Division’s founding and service in France and Germany, available at DawnoftheRedArrow.com.

A corresponding social media effort and blog that features excerpts from primary documents, letters and other artifacts will help transport readers and viewers back to 1917-18 and spotlight the extraordinary service and sacrifice of the Soldiers responsible for the Red Arrow’s legacy.

Formed from National Guard units from Wisconsin and Michigan in 1917, the division earned its “Red Arrow” moniker on the battlefields of Europe by piercing every enemy line it encountered during the war. Noting the division’s ferocity in combat, the French referred to the Soldiers of the 32nd Division as “Les Terribles.”

The modern-day 32nd Infantry Brigade Combat Team, headquartered in Camp Douglas, Wisconsin, traces its lineage to the division, which also served in the Pacific Theater during World War II and earned the distinction of serving more days in combat – 654 – than any other American division in the war. After World War II, the division became an all-Wisconsin National Guard unit until reorganizing as a Wisconsin-only brigade in 1967.

The Dawn of the Red Arrow campaign will chronicle the 32nd Division’s journey from its formation shortly after serving on the U.S.-Mexico border in 1916, to its creation in 1917 and its service in World War I through 1918.

“We’re pleased to have the opportunity to remind the people of Wisconsin as well as the Soldiers and Airmen of the Wisconsin National Guard of our organization’s heroic origins,” Thompson said. “The Red Arrow legacy is something every citizen of Wisconsin and Michigan should be proud of, and we’re honored to recount that story.”