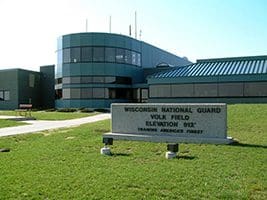 After years of planning and environmental impact analysis, as well as public review and comments, the Federal Aviation Administration officially expanded the military operations area in Central Wisconsin, which now provides an enhanced training environment for the latest aircraft.

Volk Field CRTC worked closely with other local and federal aviation entities to develop a redesign of the airspace that serve the needs of military, commercial, and civilian aviation. The Wisconsin Air National Guard’s responsible stewardship of this airspace and enduring partnership with the Federal Aviation Administration was key to the successful outcome of this initiative.

The military has used the Volk airspace for 60 years, and over that span, military aircraft have changed and advanced technologically. As a result, so too has the military’s need for airspace where pilots can conduct realistic mission-oriented training. This training prepares them to counter the 21st century threats our nation faces.

“Expanding the Volk Field Special Activity Airspace enhances our ability to train the world’s best pilots and air crews to serve our nation,” Col. David May, the commander of Volk CRTC said. “Now Volk Field and its surrounding training areas have the space to accommodate the very latest emerging aircraft and provide a world-class training environment in a strategic, cost-effective location.” 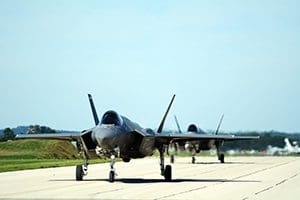 The proposed modification and expansion of the airspace better accommodates today’s more technologically advanced aircraft and allows fighters, bombers, and tactical airlift aircrews and aircraft to realistically train against emerging threats. Among the advanced aircraft that the expanded airspace can accommodate is the F-35A Lightning II. The Air Force announced in December that the Wisconsin Air National Guard’s nearby Madison, Wisconsin-based 115th Fighter Wing is one of five candidate bases under consideration to receive the F-35A.

“Volk CRTC is a national treasure, and we are grateful to have one of the nation’s premier training environments here in Wisconsin,” Maj. Gen. Don Dunbar, Wisconsin’s adjutant general said. “The 115th Fighter Wing can access and immediately begin training in the Volk airspace complex minutes after takeoff, ensuring highly efficient and effective training for our nation’s most advanced fighters.”

Volk Field CRTC hosts multiple air-to-air and air-to-ground training events each year, with aircraft and ground support elements from across the nation and multiple military services participating. These exercises previously required the annual establishment of temporary military operations areas and air traffic control assigned airspaces to ensure a safe and effective training environment for participants. Without the temporary additions to the airspace, safety became a concern, and as a result, the FAA requested that the temporary additions and modifications to the airspace granted during large-scale exercises be made permanent.

Expanding the VFSAA provides Wisconsin and the Midwest with a training area that can accommodate emerging fighter and bomber units that would otherwise be forced to deploy to more costly, limited access airspace venues elsewhere to fulfill their training requirements. The VFSAA also ensures units like the 115th Fighter Wing can access a premier training area within minutes of takeoff for years to come. Fighters, bombers, tankers, tactical airlift, cargo, mobility, helicopters, and command and control platforms all use Volk Field CRTC.

The 115th Fighter Wing’s F-16s regularly use Volk Field airspace and Hardwood Aerial Gunnery Range (R-6904 A/B on the accompanying map) almost exclusively on a daily basis due to its proximity to Madison. The 148th Fighter Wing, out of Duluth, Minnesota, uses the airspace to train for its suppression of enemy air defenses mission, and the Volk Field military operations area is the closest airspace with suppression of enemy air defenses training capability. F-16s from the Sioux Falls, South Dakota-based 114th Fighter Wing regularly use the airspace as well.

Generally, the use of the airspace will remain unchanged, and aircraft would use the VFSAA regularly during daytime hours Monday through Friday with periodic night operations throughout the year. The expanded military operations area optimizes the airspace boundaries and creates less compression of air operations, which may result in a decrease in noise experienced on the ground.

An environmental assessment of the airspace modification proposal was made available to the public in early 2016.