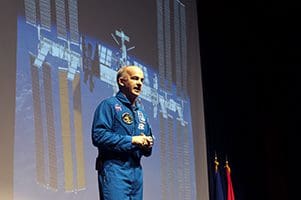 NASA astronaut and retired Col. Jeffrey N. Williams, a Wisconsin native who spent 534 days in space — more than any other American astronaut — spoke to more than 350 Soldiers at the conference about the role of teamwork in aviation safety.

“We depend upon each other to do our work, to do our job, to pay attention to the details, both to accomplish the mission and to keep everybody safe,” Williams said prior to the conference. 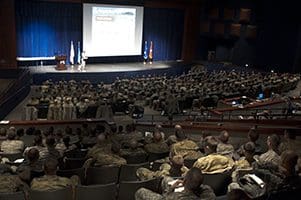 The conference brings Soldiers together who serve in direct aviation positions and in supporting positions to the Wisconsin Army National Guard’s aviation community, and drives home the importance of safety in every aspect of the organization.

“The workshop provides a forum for our aviation leaders to emphasize a safety culture and awareness,” said Col. Steve Watkins, Wisconsin Army National Guard deputy chief of staff for aviation and safety. “It is vital that members of our aviation units understand the current safety environment and ensure that safety remains a critical priority in all they do both on and off duty.”

Williams is a West Point graduate who commissioned as a second lieutenant in May 1980 and became an Army aviator in 1981. He finished NASA’s astronaut school in 1996. Aboard the International Space Station (ISS) he has served as a flight engineer, lead spacewalker and twice as an expedition commander.

However, successful missions in the brutal environment of space demand much more than the excellence of those assigned to the ISS. 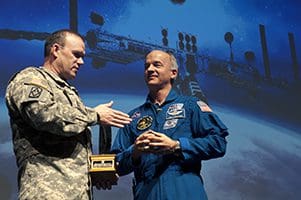 “It’s not just the flight crew,” said Williams, “It’s literally thousands of people around the world working in the different ops teams and the different international partner centers — as well as all of the engineers and the folks that do all of the preparation of the equipment that’s going to launch and that’s going to be used in the mission and everything else — and so it really is a case that puts emphasis on the importance of team, loyalty, attention to detail and trusting one another.”

Williams recognized that the environment that Soldiers are subjected to can be unforgiving as well, and he stressed the importance of safety and emphasized that message to the conference attendees.

“It’s a very important thing to do, to have a pause every now and then at a conference such as this, to actually reset that mental state of mind,” Williams asserted. “At the core basic level we are a team and we rely on each other, we trust in each other and we depend on each other.”

A number of Wisconsin National Guard Soldiers were recognized during the event for excellence in safety and having a positive impact on the development and implementation of new safety procedures.

Awardees included helicopter pilots and crewmembers with more than 500 hours of accident-free flying, as well as drivers and mechanics with extended periods of safe vehicle operation. Three individual awards for outstanding contributions to aviation safety were also given.