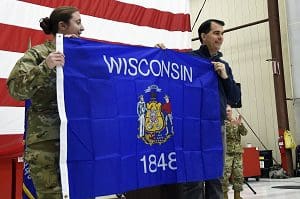 In Madison, Wisconsin, Capt. Sarah Latza thanked senior leadership for their trust and support before addressing the approximately 60 Soldiers from Companies A and D, 1st Battalion, 147th Aviation Regiment who will deploy to Kuwait.

“All of you have spent countless hours and days preparing for what’s ahead of us,” Latza said. “Our mission may not be 100-percent certain, but I want each and every one of you to know that I have full faith and confidence that we will be ready for whatever is asked of us whenever it is asked of us. You all have your own reasons for being here, but each of you volunteered to serve our great country and answer the call to arms. We are professionals of our trade, and 1st Sgt. Kowalke and I are humbled and honored to be serving with you.” 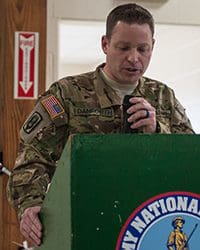 Latza then addressed the families in attendance, noting that her husband is a member of the West Bend, Wisconsin-based detachment of Company C, 1st Battalion, 168th Aviation, which will deploy to Afghanistan.

“I can’t pretend that a simple ‘thank-you’ will ever be enough,” Latza said. “You’ve entrusted me with the most precious part of your lives. I am eternally grateful for the sacrifices you have made over the last year, for the support you have given your Soldier, and for the sacrifices you will continue to make over the next year. I can assure you that any extra time your Soldiers have spent with us over the past year has ensured that they are trained and ready to head overseas to conduct their mission. I ask for your patience with us over the next year as we maintain our focus on the fight. No doubt you will be fighting your own battles here on the homefront in our absence.”

In West Bend, Capt. Robert Danforth shared a new challenge he had not faced in his two prior deployments — saying goodbye to young children at home, and explaining why their dad has to go away for nearly a year.

“It is tremendously hard on the families that are left at home,” he told a Milwaukee reporter. 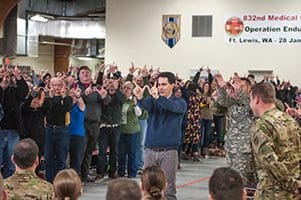 Chief Warrant Officer 5 Jon Freeman, the Wisconsin National Guard’s command warrant officer, observed that the deploying Soldiers would bring more than 85,000 hours of combined experience, and that many had prior deployment experience.

“To the families, there is no larger honor than to be called to go downrange,” Freeman said. “I know this is tough, but we send our best for a reason.”

One of those Soldiers with prior deployment experience is Sgt. Kevin Campbell, an 18-year veteran of the Wisconsin Army National Guard. He first deployed with Company C, 1st Battalion, 121st Field Artillery to Iraq in 2006-07 for a convoy escort mission. He transferred to the 147th Aviation and deployed with that unit to Iraq in 2010-11.

“For the second deployment I actually had a set schedule — it was easier to know what I was doing and where I was and when my days off were,” Campbell said. “I could plan around it. My first deployment was so hectic and timetables were always shifting — you had no idea what you were doing when.” 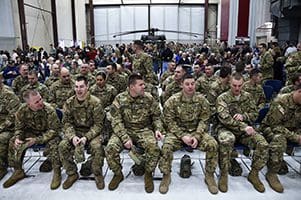 This time, Campbell will deploy as a crew chief with the 147th Aviation.

“The day that you chose to raise your right hand and swore an oath to defend the constitution against all enemies foreign and domestic, you became one of my brothers — you became one of my sisters,” Anderson said. “So as you get ready to depart downrange, that bond, that kinship, is never broken.

“I know you will accomplish your mission in the utmost highest manner,” Anderson continued. “That is the culture of the Wisconsin Army National Guard.”

In West Bend, Anderson spoke of the importance of the mission those Soldiers were assigned.

“Call themselves ‘Badger Dust-off,’ but the medevac mission that they have is absolutely crucial to the success of what the United States is trying to accomplish around the world,” Anderson said.

“I want to reassure you that we have done everything within our power to make sure that they are ready before they leave the state of Wisconsin to serve on active duty,” Dunbar said. “They are prepared — there is nobody better at what they do than these Soldiers getting ready to go overseas.”

Dunbar said the deploying Soldiers were not better or worse than the active Army.

“You are the Army,” he emphasized. “And you are ready to go overseas as American Soldiers to answer our nation’s call. But you’re more than just a Soldier — you’re a member of the National Guard, and this unit is about to write its own chapter in a great legacy of history in the Wisconsin National Guard.”

Danforth also spoke about “flying the ‘W’” while in Afghanistan, a reference to Wisconsin values and pride. Walker continued that thought, asking Soldiers, families and friends at the West Bend ceremony to form a ‘W’ with their hands to demonstrate their pride in the deploying Soldiers.

Before presenting a state flag to Latza, Walker noted that during a recent visit to troops deployed overseas, he was told that the distinction between active, Guard and Reserve troops mattered less than being able to trust each other’s capabilities.

“You are the best of the best,” Walker said. “You’re going to find that those in the military depend on you whether you’re in the Guard, Reserve or active duty. You are trained to do your mission, and you are going to do well.”

“We are honored and ready to represent the Wisconsin Army National Guard,” she said. “I can assure you, we will not let you down.”