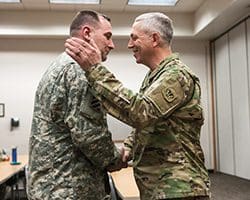 FORT MCCOY, Wis. — According to an old axiom, build a better mousetrap and the world will beat a path to your door. For the Wisconsin Army National Guard, that axiom would be about building a better way to store mortar tubes.

The 1st Squadron, 105th Cavalry Regiment is one such unit, and kept some of its 120-mm mortar tubes at MATES. But despite being small enough to carry into the field, storing this type of equipment was no small problem for the folks at MATES. 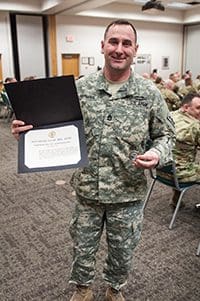 “We had no way to store them in our vault,” explained Sgt. 1st Class Jason Herman, a MATES inspector who recently worked as their welder and machinist. Rather than stack loose mortar tubes against the wall, where they might slide and fall on a smooth concrete floor, the tubes were stored on the floor, where they were at risk of being damaged by routine floor traffic.

“We wanted to design a method that we could store them against the wall so they wouldn’t get ruined,” Herman said. He spent a week in 2014 designing a compact stand, similar to a military rifle rack, which could attach to the wall — and then he built it.

A member from a National Guard Bureau Command Logistics Review Team (CLRT) saw the mortar tube rack during an inspection visit and said the design should be made available for other units to use. 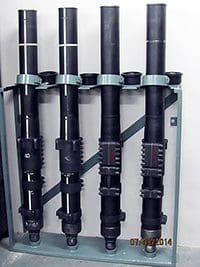 “[They] said it was a great design, a great idea, and they expected to see it submitted to the SMART program,” Hermann said. “They coined me at the time.”

Brig. Gen. Mark Anderson, Wisconsin’s deputy adjutant general for Army, spoke about relying on experts within the Wisconsin Army National Guard regarding feeding and equipping its Soldiers, as well as sustaining and maintaining its training equipment.

“We really are blessed in the Wisconsin Army National Guard with regards to the quality of the organization we field,” Anderson said, “right down to the smallest company detachment.”