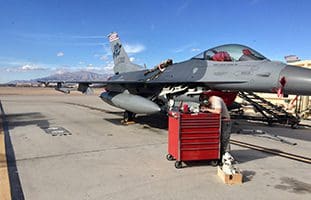 “Red Flag was founded to create a large-scale realistic tactical exercise where aircrew could learn about the environment, and then when they go into a real combat environment they would be much more likely to survive,” said Lt. Col. Bart Van Roo, 176th Expeditionary Fighter Squadron commander. The 176th is part of the 115th Fighter Wing.

“This is the most sorties and hours that our unit has ever flown in a Red Flag,” Van Roo said.

The flight activity meant maintenance Airmen were tested 24-7 on their ability to perform their duties.

“While the number of sorties per day was similar to what we fly at home, the flight times and sortie length made it challenging to not only repair broken aircraft before the next flying period, but to manage the schedule of the workforce,” said Capt. Brian Wyman, 176th Expeditionary Aircraft Maintenance Unit officer-in-charge. “Our commitment to maintaining a healthy fleet was evident by the extremely low break rate.”

After spending numerous hours preparing for their difficult missions, the maintenance Airmen were able to ensure the pilots had aircraft available when they arrived on the flightline each day.

“Our main objective was to produce combat-ready aircraft for the operators so that we could simulate high-end combat environment training day and night,” Van Roo said. “We met all training objectives for upgrade and tactical training, and our aircrews gained very valuable experience. The ability to not miss any sorties because of low aircraft availability is a testament to the way we maintain our fleet and the skill level of the maintainers who deployed.”

The Air National Guard’s mission capable goal rate for any temporary duty [TDY] is 70 percent. The maintenance Airmen on this TDY completed the exercise with a mission capable rate of 95 percent. This percentage was extremely high, especially with an intense flag exercise such as this one, Van Roo said.

“The best thing about this exercise was the number of aircraft flying and the complexity of the ground threats that we were encountering,” Van Roo said. “In most fights there were as many as 90 aircraft, and that is very hard to simulate when we are at home on a day-to-day basis. Fighting with the F-22 and F-35 gave us the full spectrum of U.S. capability, and helped us develop tactics on the leading edge of Air Force training.”

“Our wing took advantage of an opportunity to train on munitions that we don’t see at Truax Field by sending seven munitions Airmen and Capt. William Scheerer, their officer in charge, on top of the individuals deployed for the flag,” Wyman said. “About 15 other units and 99 aircraft participated.”

The British and Australians in attendance made this year’s exercise a multi-national event. Some of the airframes at Nellis AFB included B-1B Lancers, F-15 Eagles, F-16 Fighting Falcons, F-22 Raptors, F-35 Lightning IIs, and KC-135 Stratotankers, among others.

“This was the first Red Flag exercise to incorporate the F-35, and the largest 4th and 5th generation integration to date,” Wyman said.

The exercise gave the 115th FW a chance to showcase its total force integration between its Guard and active-duty Airmen.

“Particularly impressive was our night shift’s ability to return our aircraft to a mission capable status after they returned code three or ground aborted,” Wyman said. “Our Airmen were professionals on and off duty.”