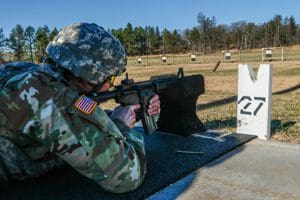 Eight noncommissioned officers and eight Soldiers of the Wisconsin Army National Guard competed in the three-day state-level event for the opportunity to represent Wisconsin at the upcoming regional Best Warrior Competition at Camp Dodge, Iowa in May.

For three-days, competitors from all over the state contended against one another in a series of mentally and physically challenging tasks including the Army Physical Fitness Test, M4 carbine and M9 pistol qualification, a stress-fire exercise, day and night land navigation, a written test and essay, an appearance board, Army Warrior Tasks, a call for artillery support scenario, and a 12-mile ruck march.

“This competition is a fairly grueling event,” Conde said. “It’s an accomplishment just to complete all those tasks within 52 hours.”

In addition to the planned events, competitors also had to complete mystery tasks. The first mystery task started as the Soldiers completed their Army Physical Fitness Test, testing both their physical and mental strength.

“Once they finished their 2-mile run, they were handed a weapon, and they were asked to keep running,” Conde said. “We’ll tell you when to stop. Not only did that test your endurance, but your resilience as well. You didn’t know when to stop.” 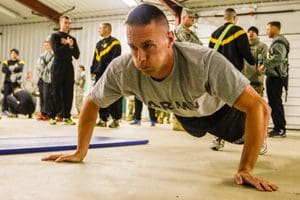 Each event presented a unique challenge but the true difficulty comes from the pacing and variety of each one.

As a competitor in the 2016 Best Warrior Competition and a sponsor this year, Sgt. Zachary Tomesh, a public affairs specialist with the 112th Mobile Public Affairs Detachment, 641st Troop Command, 64th Troop Command, knows the difficulties of the competition first hand.

“The most challenging part is going from event to event,” Tomesh said. “There is very little downtime in between. It takes a lot of mental preparation in the days leading up to the competition.”

Preparation does not just start in the days leading up to the competition. It begins with the first day of every Soldier’s military training, sponsor Sgt. Michael Brand, a first line leader with the 107th Support Maintenance Company, 732nd Combat Support Sustainment Battalion, 64th Troop Command, said.

Brand advises future soldiers preparing for the event to go back to the beginning.

“Study everything you learned in basic training and with your unit,” he said. “It all comes together in this competition.”

Tomesh agreed that training starts at the beginning.

“Go back to basics, get your hands and feet dirty, sweat a little, and have fun,” Tomesh said.

“Go with the gut and don’t second guess,” Montez said.

Competitor, Sgt. Thomas Wolf, a motor transport operator with the 1157th Transportation Company, 732nd Combat Sustainment Support Battalion, 64th Troop Command, said that the key to success in this competition, is to look beyond winning.

“Winning the competition should not be your motivation,” said Wolf. “Your motivation should be to push yourself to your limits. If you do that, you’re already coming out of this experience with more than you started with. It’s hard but you get to see your limits. Competing has helped me grow as a noncommissioned officer. It’s great to see people go above and beyond. It makes me want to try harder and be a better leader.”

Brand saw value in participating as a sponsor and mentoring a Soldier.

“The Best Warrior Competition will make you a better Soldier and a better person,” Brand said. “As a sponsor, I have found that it is very rewarding. I get to pass on everything I’ve learned and watch them grow.”

“Everyone who comes here leaves with something more,” he said. “Whether it is the training and knowledge they gained in the preparation or the experience they gained during the competition.”

Command Sgt. Maj. Jason Grundel, a command sergeant major with the 1st Battalion, 121st Field Artillery, said the competition has benefits for not just people directly involved but also positive effects on the units as the competitors share their skills, experience and pride.

“Units take pride as they watch their soldiers go further and further in the competition,” Grundel said.