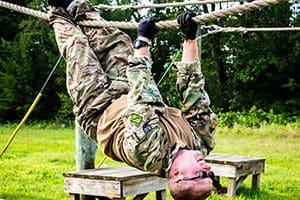 An exchange program has helped forge personal relationships and improve interoperability between the United States and the United Kingdom after partnering noncommissioned officers from both countries together for two weeks of training in Wisconsin.

“The main purpose of the program is to kind of learn how different countries can work together toward one main goal,” Rehtmeyer said.

The program helps develop cultural understanding, regional expertise and language proficiency and bilateral interoperability, which, in the case of the Wisconsin National Guard, helps develop its capacity to fulfill its federal mission as the Army’s primary combat reserve.

The visit coincided with the 1158’s annual training. It was the first time Pope or Rehtmeyer had an experience like this despite having trained with NATO allies before. Rehtmeyer trained in Poland for her annual training last year, and Pope has been on operational tours with the United Kingdom Army Reserve.

“When I joined, when it was called the Territorial Army twenty years ago and other nations had joined NATO, we were just doing the MREP thing then,” Pope said. “I think it was predominantly for officers and senior [noncommissioned officers].” 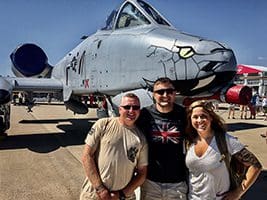 The program is currently open to National Guard and Army Reserve Soldiers with the ranks of second lieutenant through captain, and specialist through sergeant first class who meet the eligibility criteria. Participants selected for the program will host an exchange service member with their unit, and later in the year, they will travel to the exchange service member’s country to train with their unit.

Pope said he took a lot of time to watch how Wisconsin Soldiers train and compared it with how he trains back in the UK.

“I’m constantly saying to Soldiers, ‘well look, this is how we do it in our army reserve. In my unit, this is how we go about things, and I’ve noticed that you go about it slightly different,’” Pope said. “Sometimes I might say, ‘perhaps you’re overcomplicating things. Maybe this might be the right approach to it.’ And then I’ve taken a step back and gone ‘wow, that’s actually quite good. That’s something that I’m going to take back to my unit and I’m going to try and implement in my unit.’”

Wisconsin Soldiers have also taken advantage of learning from a foreign military member.

“He gets swarmed every day with a bunch of questions on just daily operations, how their rank structure works, and talking about deployments and everything like that because he has 20 years of service in so he has a lot of experience,” Rehtmeyer said.

Pope said he was happy to train with Wisconsin Soldiers. 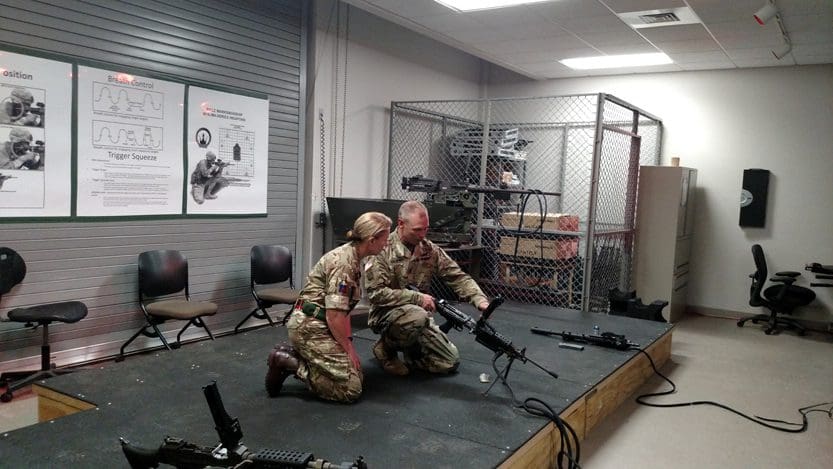 “I’ve really enjoyed myself here, and I’ve probably made quite a lot of friends,” Pope said. “I want to say friends as opposed to comrades in arms, because some of the Soldiers that you’ve got here are spot on, and they get my sense of humor which is quite dark and I like that.”

This was Ferguson’s second time visiting the United States as a participant of the exchange program. In 2012, she trained with the 133rd Engineer Battalion, a unit with the Maine Army National Guard.

There were significant differences between her experience in 2012 and her recent experience, Ferguson said. With the Maine National Guard, she spent most of the time participating in a large-scale exercise. While at Fort McCoy, Ferguson had the opportunity to participate in many different training events, including the driving simulator, being part of a Paladin crew on an Engagement Skills Trainer simulator, firing weapons and rollover training.

“We got to do it together and work together as a team,” Burrows said about the rollover training. She added that it helped her and Ferguson collaborate in the heat of the moment, building trust between the two.

Ferguson also learned a substantial amount about Burrows’ job and supply operations while in Wisconsin. 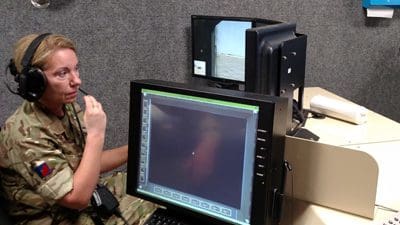 The experience has greatly benefited Ferguson’s training and career, she said. She hopes to encourage more people to participate in the exchange program when she returns to the UK.

Burrows added that the program benefits the Wisconsin National Guard as well.

“I think it really helps with readiness a lot, especially if we’re ever in a NATO or joint operation, being able to work with the difficulties and knowing the similarities, knowing the differences,” Burrows said.

Aside from conducting military training, Burrows and Ferguson also spent some time building morale and their interpersonal relationship. Among other activities, they watched a collegiate baseball game, toured the Fort McCoy History Center and hiked at Devil’s Lake. The hike was one of Burrows’ favorite parts of the experience.

“It is just a beautiful hike,” Burrows said. “We were able to get to know each other more and had plenty of time to talk while we were hiking.”

Burrows and Rehtmeyer will travel to the United Kingdom in September to train with their respective exchange soldiers. Burrows said the experience has helped prepare her for her future endeavor.

“I think it’s been phenomenal,” Burrows said. “The two weeks have flown by. It’s almost like we need another week. There’s so much to show her, but it’s been amazing experiencing and hearing how things are similar or different to the UK. I really look forward to when I get to go there.”