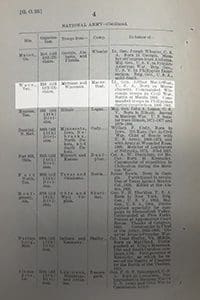 General Order 95, a five-page document published by the War Department 100 years ago today, serves as the birth certificate for the 32nd Division.

One hundred years later, the Red Arrow continues to be of value to the State of Wisconsin and our nation. Just last week, approximately 80 Red Arrow Soldiers were on duty in Burlington, Wisconsin, where they assisted local authorities with a flood response in the aftermath of torrential rains that soaked the area July 11-12. The Soldiers spent three days on state active duty manning traffic control points on roadways affected by floodwaters and conducting health and welfare checks.

“Like their forefathers before them, today’s Red Arrow continues to demonstrate its tremendous value to the people of Wisconsin and our nation,” Maj. Gen. Don Dunbar, Wisconsin’s adjutant general, said. “The Red Arrow has a proud legacy of service that the people of Wisconsin should be proud of. We continue to add to that legacy every day through the service of the brave men and women who continue to wear the Red Arrow on their sleeves.”

Coincidentally, General Order 95 called for the formation of 32 divisions — 16 active Army and 16 National Guard — detailing the training location and which military legend the training camp is named for, as well as the home states of the troops who would form the various divisions.

Wisconsin would supply 15,000 men and Michigan another 8,000 to form the 32nd Division at Camp MacArthur in Waco, Texas. Camp MacArthur was named after Lt. Gen. Arthur MacArthur, a Wisconsin volunteer infantry regiment Medal of Honor recipient from the Civil War who also commanded troops during the Spanish American War as well as the Philippine Insurrection.

Wisconsin and Michigan would also supply troops to form the active Army 85th Division — the “Custer Division” — at Camp Custer in Battle Creek, Michigan. Maj. Gen. James Parker, the initial commander of the 32nd Division, would command the 85th Division from December 1917 until his mandatory retirement in February 1918. 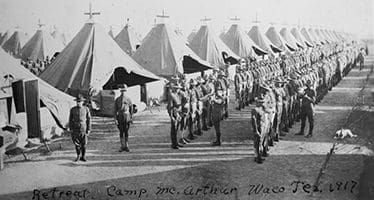 While it is accurate to state that the 32nd Division was established on July 18, 1917, it is also important to note that the organization only existed on paper on that date. Wisconsin National Guard Soldiers — who had begun to arrive at the Wisconsin Military Reservation at today’s Camp Williams, Wisconsin, on July 2, 1917 — were ordered to federal service only three days prior to General Order 95. They would separate from the National Guard and be drafted into federal service on Aug. 5 — federal law at the time prevented National Guard troops from deploying overseas. Parker would assume command of the 32nd Division on Aug. 17, and the first Wisconsin troops would not arrive at Camp MacArthur until Aug. 18.

Three companies of the Wisconsin National Guard’s 2nd Infantry Regiment — Company E from Fond du Lac, Company F from Oshkosh and Company G from Appleton — were organized into a machine gun battalion and assigned to the 42nd (Rainbow) Division, which was training at Camp Mills, New York. The current 2nd Battalion, 127th Infantry Regiment of the Wisconsin Army National Guard includes a rainbow in its distinctive unit insignia to reflect that some of its companies once served as part of the 42nd Division.

In addition to preparing for an overseas war, Wisconsin troops had to shed their affiliation with the beloved regimental organization — and its rich heritage — in favor of the new divisional structure. Many of these new unit designations remain in use to this day. The division would earn its famous nicknames “Les Terribles” and “Red Arrow” the following year on the battlefields of Europe.

The 32nd Division distinguished itself again in World War II, fighting in the Pacific Theater in New Guinea and the Philippines. The Division mobilized in 1961 and deployed to Fort Lewis, Washington, amid simmering tensions with the Soviet Union during the Berlin Crisis.

Now 100 years later, the legacy of the 32nd Division, lives on in the form of the Wisconsin National Guard’s 32nd Infantry Brigade, and just as it did when it answered the call to arms in 1917, the Red Arrow continues to fulfill the National Guard’s dual mission as the state’s first military responder and the Army’s primary combat reserve.

The Red Arrow became a brigade in 1967 but continued to prove its worth deploying to REFORGER (Return of Forces to Germany) 1986, and supporting the global war on terror numerous times since the Sept. 11, 2001 terror attacks. Many battalions deployed to Iraq between 2004 and 2007, and the entire brigade deployed to Iraq in 2009. More recently, two detachments of brigade Soldiers deployed to Kuwait in 2014 for base defense operations and cooperative military engagement with regional coalition partners.

The Wisconsin National Guard is commemorating the 100th anniversary of the 32nd Division and its participation in World War I with “Dawn of the Red Arrow,” a collection of print and video stories, photos and social media posts marking key moments in the history of the famed 32nd Division.

The 32nd Infantry Brigade Combat Team is marking the centennial of the Red Arrow’s formation during a ceremony at its headquarters in Camp Douglas, Wisconsin – the same site from which the division was originally headquartered prior to World War I.