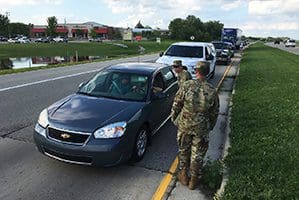 More than 80 National Guard Reaction Force troops are in Burlington, Wisconsin in Racine County, assisting local authorities in the wake of extreme flooding there.

Torrential rains soaked the area July 11-12, prompting Gov. Scott Walker to declare a state of emergency for Kenosha, Racine and Walworth counties due to the widespread flooding across southeast Wisconsin. Soldiers from the 1st Squadron, 105th Cavalry Regiment, headquartered in Madison, are operating in Burlington, and Airmen from the Wisconsin Air National Guard’s 128th Air Refueling Wing in Milwaukee are supporting the flood relief effort as well.

The Soldiers worked Thursday assisting local authorities with traffic control near municipal bridges and roadways in Burlington affected by high water and conducting health and welfare checks at apartment complexes and residences affected by the flooding.

The National Guard will remain on state active duty working round-the-clock, ready to assist local authorities as long as they are needed, Guard leaders said. 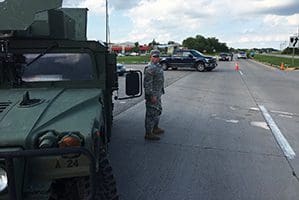 “The civilian agencies that we’re partnering with and supporting in this operation have been coming to us and saying, ‘we want you still,’” Capt. Trevor Thomas, the officer in charge of the Wisconsin Natioanl Guard Reaction Force said. “As long as that demand signal exists for us to be there and they want us and we’re value added then that’s what we’re here for.”

Thomas said the Soldiers under his command have been eager to assist the community in the recovery effort and happy to work side-by-side with local emergency managers, law enforcement and local fire departments.

“Today has been an opportunity for us to really build a positive relationship with the community, and the Soldiers love that,” he said.

“They’re excited to do it,” he added. “It makes me feel good about the kind of guys that we have in the National Guard.”

And support from the community in Burlington has been overwhelming. Local residents greeted Soldiers manning the traffic control checkpoints and welcomed them to the city by dropping off cold water, sports drinks and food to show their appreciation for the Guard’s efforts. 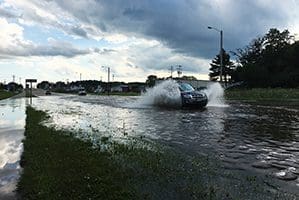 “I think it says a lot about the community itself,” Thomas said. It’s a great community.”

“As you can see, people have definitely shown their appreciation,” Harvey said while serving at a traffic control point near a flooded roadway. “It’s hot out and muggy, but people are showing their appreciation and bringing out food and cold drinks and stuff. It’s nice.”

“This is my first time being called up for the National Guard response force, and I’m happy with what I’m doing here,” he said.

The flooding is affecting many homes and businesses, and sandbagging efforts continue throughout the region.

The state departments of Natural Resources, Administration, Corrections, Health Services and Agriculture, Trade and Consumer Protection, along with the Wisconsin State Patrol and Wisconsin Emergency Management have been assisting with response and recovery efforts.

“I thank the Wisconsin National Guard, Wisconsin Emergency Management and all state agencies for their coordinated response to this emergency,” Walker said. “Our thoughts and prayers are with the victims of the flooding.”

City leaders were grateful to have the National Guard on hand to assist.

“I have to say that when I contacted the governor, I feel that bringing the Guard down here is also giving reassurance to our citizens that they are also safe,” Burlington Mayor Jeannie Hefty said during a news conference Thursday afternoon.

With National Guard Soldiers manning checkpoints along flooded roadways and bridges in Burlington, local law enforcement were freed up to tend to more pressing issues around the city, Thomas said, and the additional personnel provided by the Guard helped local authorities knock on hundreds of doors to check on residents in areas affected by the flooding.

“I’m proud of our National Guard, and I’m proud of the emergency management professionals who are working round-the-clock to mitigate the impact of this disaster on the affected communities,” Maj. Gen. Don Dunbar, Wisconsin’s adjutant general said. “Assisting local authorities as the state’s first military responder during times of emergency is at the very core of who we are as the National Guard.”