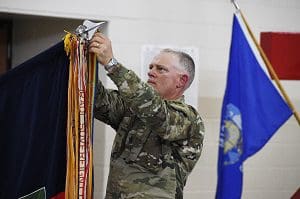 General Order 95 originally formed the 32nd Division formed July 18, 1917 as the U.S. prepared to enter the First World War. The division transformed into the 32nd Infantry Brigade in 1967.

The events of the day included a panel discussion with key speakers from the Wisconsin National Guard Museum, the son of a World War I veteran of the 32nd Division, National Guard historians, a collection of historical documents and memorabilia on display, and an official ceremony recognizing the storied history of the 32nd Red Arrow division. 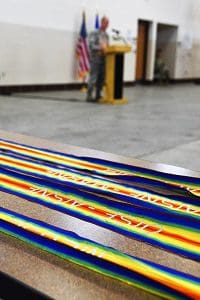 “This unit has a reputation for not only doing it right but exceeding the standard the United States Army sets for a National Guard unit,” he added. “We should remember their history with events like this, and honor that legacy,” he said.

Dunbar spoke about the 32nd Division’s role in WWI, WWII, the Berlin Crisis, and their role in more recent deployments in support of Operation Iraqi Freedom as a brigade. Just as it did at its formation in 1917, he said, the Red Arrow continues to serve Wisconsin as the state’s first military responder and as the Army’s primary combat reserve. 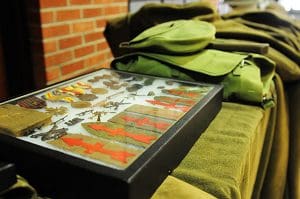 “At the end of the day, it’s about defending this country. It’s about defending our flag,” Dunbar said.
Eric Lent, curator of the Wisconsin National Guard Museum at Camp Williams, was one of the key speakers during the panel discussion on the history of the division and its role in World War I.

“You have the birth of the 32nd Division and in an incredibly short period of time they’re an occupying force of an enemy nation on another continent,” Lent said regarding the division’s occupation of Germany following the armistice of World War I. “That’s pretty impressive.”

Lent highlighted many of the accomplishments of the Red Arrow throughout the years, and the panel discussed how the unit has had a significant cultural impact beyond the battlefield in the communities and families throughout Wisconsin. 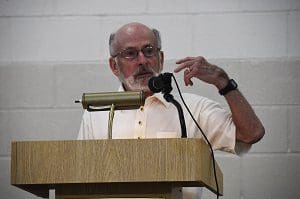 Clark emphasized not only the battles that had been fought and won by the Red Arrow overseas, but also the battles fought back home after the men and women had returned.

“They didn’t have the benefits that we have today,” Clark said. “They had to band together and fight a new war. It was a struggle.”

He spoke about the formation of the World War I Veterans Association, which surprisingly had not been created until long after the Great War.

“All of us are beneficiaries of those seeds that were planted,” Clark added.

The panel discussed how the legacy of the Red Arrow lives on in today’s Wisconsin National Guard.

“The division has been very important, and moving forward, it will continue to be important for the defense structure of the United States,” said Capt. Brian Faltinson, a public affairs officer for the Wisconsin Army National Guard, and former State historian.

“World War I can be considered to be the birth of the modern Wisconsin National Guard,” he said.

“America’s history is freedom’s history and it must be defended,” Dunbar said.

To follow along as the Wisconsin National Guard commemorates the centennial of the 32nd Division and its service during the First World War, visit www.dawnoftheredarrow.com or follow on Facebook at www.facebook.com/dawnoftheredarrow.