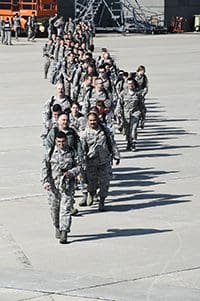 Imagine your daily routine. Waking up and drinking a cup of coffee, driving to work, grumbling about the traffic, working eight or more hours, then returning home to spend time with your family before laying your head on your pillow only to wake up and do it all again.

Now imagine, upon waking the next morning, you find it has all been ripped away and replaced with bloodshed, violence and fear imposed by a brutal organization forcing utter submission or death.

This became daily life for citizens of Mosul, Iraq, when ISIS declared its caliphate and established a de-facto capital there in 2014.

“A couple of years ago, a citizen living in Mosul could have just been having what they deem as a normal existence, and all of a sudden it was completely flipped over on its head,” said Lt. Col. Shell, 27th Expeditionary Fighter Squadron commander. “ISIS threw [Iraq and Syria] into complete chaos, and anything we can do to get rid of them so that citizens can go back to their daily lives is greatly important.”

On July 9, Combined Joint Task Force-Operation Inherent Resolve welcomed Prime Minister Haider al-Abadi’s announcement of total victory in Mosul. Lt. Gen. Stephen J. Townsend, CJTF-OIR commander, stated that while the loss of one of its twin capitals is a decisive blow, a long struggle against ISIS still lies ahead.

It’s a struggle in which the 380th Air Expeditionary Wing will no doubt continue to provide support, said Brig. Gen. Derek C. France, 380th AEW commander. As the only wing in the U.S. Central Command area of responsibility supporting all five Air Force core missions, the 380th AEW significantly contributed to the airpower effort over Mosul.

“Our tankers were used to extend close air support on-station times for platforms performing strikes against ISIS in Mosul,” said France. “Our E-3 Sentry and Kingpin Tactical Battlefield command and control systems were crucial to orchestrating the host of players across the AOR who played a role in the fight. Finally, our F-22 Raptors provided Air Superiority and on call CAS when needed.”

Members of the Wisconsin Air National Guard’s 128th Air Control Squadron are presently helping manage the airspace. According to Maj. Cynthianna Eslinger, the temporary home station commander for the 128th, the deployed Airmen are working missions during the night shift, while their active-duty counterparts work the day shift. “Our Airmen are directly supporting the command and control, intelligence, surveillance and reconnaissance part,” she said. “We work alongside the active duty air control squadron.”

“The KC-10 can offload through boom or center-line drogue without any maintenance changes, so we can take-off then offload to U.S., Coalition, or NATO Partners,” said Maj. Dave, 908th EARS director of operations.

Dave commented on challenges associated with being a pilot by saying, on average, a KC-10 co-pilot may deploy up to three times a year for around 90 days each rotation, and 1st Lt Griffin, 908th EARS intelligence officer, agrees.

“Being on the job six days a week, working 12 hours a day and not having my phone to connect with my family has definitely been challenging, especially dealing with personal issues that can’t be addressed right away because of the time difference,” Griffin said.

To ensure deployment challenges don’t overtake Airmen, the 908th EARS checks on crews often to evaluate their status. Dave mentioned the squadron makes sure they get enough rest, address family challenges and remain able to perform the mission safely.

“It’s uplifting to hear that our constant efforts in the sky and persistent refueling at all times of the day are helping a family in Mosul get back to their home and try to rebuild,” Griffin said.

While not in direct support of the 380th AEW, more than 90 members of the Wisconsin Air National Guard’s 128th Air Refueling Wing have deployed to the Middle East since December 2016 to support air mobility operations in the region.

Dave stressed the importance of other 380th AEW units that support the 908th EARS mission, which requires transportation, lodging, meals, maintenance, intelligence and much more.

“We’re just another cog in the support effort for the warfighter; F-22, bombers, A-10 [Thunderbolt IIs],” Dave said. “[Warfighter aircraft], in turn, support troops on the ground fighting, the door-to-door war.”

Managing the battlespace: Command and Control, Intelligence, Surveillance and Reconnaissance

Detailed images, sent from manned and unmanned aircraft, are exploited by analysts to paint a picture of the battlespace. Flight paths and plans, derived from that intelligence, trace tangled webs across several monitors at a command and controller’s station.

These two blend together to manage the battle rhythm in the sky and on the ground. While combatting the adversary, warfighters depend on the Command and Control as well as Intelligence, Surveillance, and Reconnaissance portions of the 380th AEW mission to provide time-sensitive information, coordination and assets.

Command and control centers like the 727th Expeditionary Air Control Squadron take that information and compile plans for pilots to apply in the field.

“We’re basically providing the battle management for the AOR, getting sensors, weapons and fuel where they’re needed before they’re needed,” said Capt. Tyler, 727th EACS senior director. “While Air Traffic Control keeps aircraft apart, our job is to get them to their targets.”

Representing a true Coalition effort, Airmen with the 727th EACS manage an ever-changing battlefield, providing warfighters with the tools they need for successes like the liberation of Mosul. Tyler stressed the relationship U.S. service members share with Coalition partners.

“We have multiple Coalition partners working in and a part of our squadron. They’re not just another attached unit, we’re working under one house,” Tyler said. “Even on the U.S. military side, we’ve got Marines, active duty, and guard as well as other branches. There’s a true Total Force, a Joint Force and Coalition component to what we do.”

Airmen train vigorously to maintain constant de-confliction and updates to an ever-changing environment. Tech. Sgt. Eric, 727th EACS weapons controller, stressed the importance of not only training, but work-rest balance.

“Since we’re in charge of multiple aircraft, multiple tankers, and one error can lead to someone not completing their mission, we ensure everyone is sufficiently trained to make [the mission] happen,” Eric said. “[This job] is very mentally challenging, and to constantly be figuring things out in your head takes its toll.”

To avoid Airman ‘burn-out’ while maintaining consistency, Airmen rotate between work and rest approximately every three hours. During this downtime, they watch TV or find other ways to decompress. This provides Airmen with a reprieve from ‘The Mental Jenga Game,’ as Tyler explains it.

The wild blue yonder beckons pilots as fighter aircraft flit from target to refuel and back again on a repeated cycle. When the aircraft touch down after a 10-hour flight, empty of munitions, the pilots know somewhere ISIS is having a rough day because of their efforts.

Pilots with the 27th Expeditionary Fighter Squadron and their F-22s have supported CJTF-OIR and the fight against ISIS since the start, said squadron commander Shell. The F-22 can support multiple mission sets, including offensive and defensive counter-air, escort of strike assets, and execution of precision strikes.

“Specifically in Mosul, we have executed close air support,” he said. “We execute a combat patrol overtop of Mosul, waiting for our joint terminal air controllers to find targets and pass us the targeting information, then we execute a strike in support of our ground forces.”

The flexibility required to accomplish such a versatile mission can take its toll on everyone involved, said Shell. Pilots will sometimes fly 10-hour sorties at varying times of the day, which can be harmful to all areas of an Airman’s health. This affects everyone who touches the mission.

Because of this, Airmen have to be able to rely on each other for support, said Shell. From the 380th Expeditionary Force Support Squadron to the 27th Expeditionary Fighter Squadron maintainers and operations support, everyone plays an equal role in keeping the mission flying.

That same concept of teamwork in the fight extends to Coalition partners as well, he said.

“The forces of today are all smaller than they used to be, so there’s synergy when you put multiple team members together,” he said.

With each Airman playing such a critical part in CJTF-OIR and in the victory in Mosul, Shell makes a point to emphasize the level of pride they should have in what they do.

“I have a very large sense of pride that we had a hand in helping to reclaim and liberate Mosul,” he said. “To be in an area that has such a steep history with multiple different [people] fighting over the same territory, it’s very prideful to be able to help liberate that city out of the arms of ISIS and hand it back to the citizens of Mosul so that they can go back and rebuild their lives.”

Even though the battle has been won, the overall fight continues. Shell said because of this shift, the fight will move to follow ISIS’ movement.

“We’ve nearly eradicated ISIS in Mosul, but they still exist in other areas of Iraq and Syria,” he said. “So we will move our fight to where they aren’t to where they are. We will start executing the same missions in different areas to eradicate ISIS from each location as we push them out of their territory and destroy their caliphate.”

The overall mission: Defending the lives of strangers

“Our values call upon us to care about the lives of people we will never meet,” said President Barack Obama at Berlin’s Brandenburg Gate in 2013; and so reads a sign that Senior Airman Taylor, 908th EARS intelligence analyst, hung on the squadron breakroom wall. He said the quote reminds Airmen of why they do what they do.

To keep Airmen at the 27th EFS focused on why the fight is important, Shell paints a picture of how life was interrupted for the citizens of Mosul. This way, Airmen can find something more familiar in the struggle and relate to the plight of those they defend.

“If we took that same model and put it on any city in the United States, and the drastic change that could have been felt, the [Airmen] internalize that,” said Shell. “The chances of something like Mosul happening in the United States are slim to none, but it still puts a very real spin to what they’re doing so that they can empathize with the citizens of Iraq and Syria.”

Though the battle for Mosul has been won, a long fight still looms on the horizon. In the meantime, however, the 380th AEW commander reminds Airman to take pride in the impact they had in history.

“The Airmen of the 380th AEW played a significant part in the Airpower effort in Mosul,” France said. “The entire team of 380th AEW Airmen should be proud of the role we played in this historic step in the fight against this brutal and oppressive enemy.”