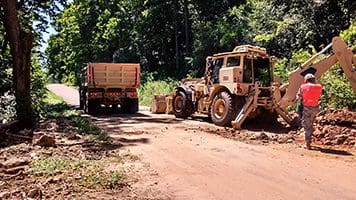 Roadways in Monroe County affected by flood debris in the wake of heavy flooding last month are clear once again thanks to the efforts of engineers from the Wisconsin Army National Guard.

The Soldiers completed their second flood debris removal mission in Monroe County Aug. 1 when they finished removing brush, downed trees, and other materials from the roadways in the Town of Jefferson, Wisconsin. The engineers completed a similar mission in the nearby Town of Portland, Wisconsin, July 30 after local authorities requested the National Guard’s assistance July 28.

Their primary task was to clear both lanes of traffic and road shoulders of debris so motorists and emergency vehicles could pull over when needed. They ultimately cleared approximately 1200 cubic yards of debris from Jefferson roadways. By clearing the shoulders, it also ensures that debris will not end up back on the roads again after the next rainfall, 1st Lt. Johnathon Gause, a platoon leader in Company B, 173rd Brigade Engineer Battalion, and the officer-in-charge, said. 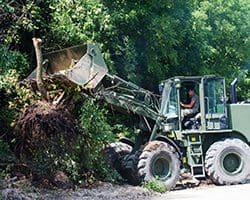 “Then we are kind of re-digging the ditch for the drainage on those sites as well so that it keeps the water moving,” Gause said. “Because once that water stops moving, that’s when you’re going to start getting dirt on the road and other stuff that is dangerous for local traffic here.”

Gause said that the opportunity to serve local communities has been rewarding and that both Jefferson and Portland have treated the Soldiers well.

“Both townships have been ecstatic that we are here to help them, because they are both very small communities,” he said. “They don’t have many resources at all.”

“Overall they are looking at millions of dollars of damage,” he added. “Of course we’re not able to help with all of that, but we’re able to take some of the big stuff off their plate and do some of the heavy lifting so that they can move on to the other tasks, some of the other $1.5 million worth of tasks that they’ve got to worry about.”

Jefferson Town Chairman Earl Laufenberg praised the National Guard for its efforts in assisting his town. 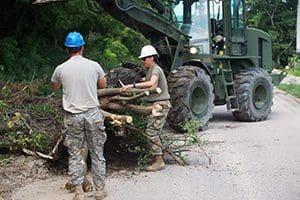 “The men were very good to work with,” he said. “I had absolutely no problems, and all I can say is that the Town of Jefferson really appreciates the National Guard coming in.”

Gause was grateful to have members of the community that were so accommodating to their needs. The engineers worked on multiple sites in Jefferson, and nearby landowners graciously allowed the Soldiers to use their driveways as turnaround points and their properties for temporary equipment staging areas, he said.

Completing the missions in Monroe County was a win-win for both the National Guard and the it assisted, Gause said. Not only did the communities get the support they needed, but the Soldiers received quality real-world training and experience that will help them in both their state mission as the state’s first military responder, but also as the Army’s primary combat reserve.

“This is exactly what we are here for,” Gause said. “The more time we get on sites like this, the more ready we’ll be for the next one.”

It will also help prepare the Soldiers for future federal missions where they may need to use some of the same skills overseas.

“It’s not just the sand pit up at Fort McCoy,” he said. “You have to use different techniques. When you’re digging in a sand pit at Fort McCoy, you just don’t get the real world challenges that you get out here.” 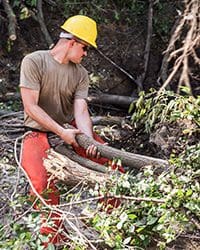 The engineers encountered different challenges ranging from root structures, different slopes and angles, and confined spaces due to narrow roadways. It also allowed the unit’s leadership to learn the limitations and capabilities of each piece of equipment. The Soldiers operated heavy military engineering equipment including skid steers, 10-ton dump trucks, excavators and additional equipment to assist.

Gov. Scott Walker declared a state of emergency in Monroe County and 16 other counties across the state July 21, which authorizes Wisconsin’s Adjutant General Maj. Gen. Don Dunbar to employ the National Guard to assist local authorities as needed.

“Serving Wisconsin’s communities in their hour of need is one of our primary missions, and we stand ready to assist again when the need arises,” Dunbar said. “I’m very proud of the men and women in the National Guard for the professionalism they displayed in Monroe County.”

The engineers cleared more than 50 loads of debris from Portland before moving to Jefferson. Airmen from the Wisconsin Air National Guard also delivered 10,000 sandbags to Trempealeau County July 21 in advance of heavy rains forecasted for the area.