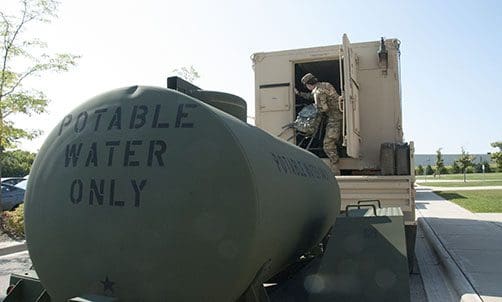 More than 2,500 Wisconsin National Guard troops will be heading to Florida to help in the response and recovery efforts for Hurricane Irma.

“We stand ready to help our friends in Florida who are bracing for Hurricane Irma, one of the strongest Atlantic Ocean storms on record,” Gov. Scott Walker said. “I thank Maj. Gen. Dunbar and the men and women of the Wisconsin National Guard for their readiness and willingness to assist in response efforts. We are also directing all state agencies to assist the Wisconsin Department of Military Affairs in responding to this situation.”

Gov. Walker issued Executive Order 254 Sept. 8, which authorized Wisconsin’s adjutant general to call Wisconsin National Guard troops to state active duty to assist Florida. Their mission set will be determined when they arrive in Florida, but may include rescuing people trapped by floodwaters, preventing injuries and protecting property.

The entire 32nd “Red Arrow” Infantry Brigade Combat Team, the 1157th Transportation Company, members of the 112th Mobile Public Affairs Detachment and other Wisconsin Army and Air National Guard elements were called to state active duty and are reporting for duty and beginning to travel to Florida. 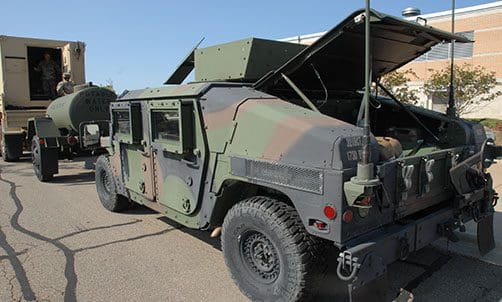 The troops will remain in the region as long as they are needed to assist civil authorities.

“We are keeping Florida and all those affected by Hurricane Irma in our thoughts and prayers,” Maj. Gen. Don Dunbar, Wisconsin’s adjutant general said. “Mobilizing in times of state and federal emergency is at the very core of who we are as the National Guard. Not only are we the primary combat reserve of our nation’s Army and Air Force, we are also the nation’s first military responder in times of emergency.”

“Wisconsin is ready to assist in any way necessary, and National Guardsmen from the Badger State will remain in the region as long as needed,” Dunbar added. “It’s our honor and privilege to assist the people of Florida and their Adjutant General, Maj. Gen. Michael Calhoun in this response.”

“Our mission is to help the people of Florida in any way that we can,” Col. John Oakley, the commander of the 32nd Infantry Brigade. “Our dual mission – both federal and state, is what makes the National Guard unique. We train to defend our nation and are uniquely suited and ready to perform humanitarian assistance and disaster relief. We are well prepared and ready to take on any mission required.”

The Florida National Guard as well as National Guard units from other states mobilized in response to Hurricane Irma, and now Wisconsin will join other states in sending support in the form of personnel and equipment to aid in the recovery efforts. Florida Gov. Rick Scott asked Wisconsin Gov. Scott Walker for the assistance of Wisconsin National Guard forces through an Emergency Management Assistance Compact request. EMAC is the nation’s state-to-state mutual aid system, and Florida is using EMAC to reach out to Wisconsin and other states to meet specific needs in dealing with the aftermath of Hurricane Irma.

Wisconsin units join units from around the country as part of a nationwide task force serving under the command and control of Florida’s adjutant general. The Wisconsin troops will serve alongside National Guard units from Ohio as part of a task force administered by the Indiana-based 38th Infantry Division Headquarters.

After arriving in the region, the 32nd Infantry Brigade Combat Team will be available to the dual status commander as a resource to assist local authorities and first responders with response and recovery efforts.

The 32nd Infantry Brigade’s mobilization represents a historic moment in the storied lineage of the Red Arrow, which formed 100 years ago in July 1917 as the United States prepared for World War I. Today, with more than 3,000 Soldiers assigned, the Red Arrow remains the largest unit within the Wisconsin National Guard.