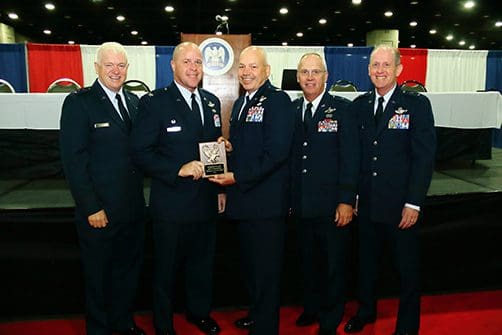 MILWAUKEE — The 128th Air Refueling Wing was honored by two military associations for its outstanding service this past year.

On behalf of the men and women of the 128th Air Refueling Wing, wing commander Col. James Locke accepted the Air National Guard’s 2016 Distinguished Flying Unit Award Sept. 10, during the National Guard Association of the United States 139th General Conference and Exhibition at the Kentucky Exposition Center in Louisville, Kentucky.

“It’s such a privilege to be a part of this organization,” Locke said. “To be recognized as one of the top five performers out of 90 wings is a true honor.”

“It was extraordinary to be amongst all the top Airmen of the United States Air Force to witness the 128th Air Refueling Wing receive the Outstanding Air National Guard Unit of the Year,” Locke said. “For our Airmen to be recognized in two fantastic venues is extraordinary.”

These awards indicate meritorious service to the Air National Guard and the Air Force, a result of achievements supporting Operation Freedom’s Sentinel and Operation Inherent Resolve. For those missions the 128th Air Refueling Wing contributed 2,393 flying hours and fueled 1,028 receivers with 11,330,000 pounds of fuel.

Service members with the 128th Air Refueling Wing participated in numerous exercises that contribute to its readiness and excellence.

“The 128th Air Refueling Wing is committed to maintaining its future as a leading refueling unit in the Air National Guard,” Locke said.

The 128th Air Refueling Wing is positioned to continue its excellence this year by supporting hurricane relief efforts as the first military responder in the homeland and deploying more than 150 members across the globe in support of Operation Inherent Resolve, Operation Freedom’s Sentinel and the Pacific Command Theater Support Package as the nation’s primary combat reserve.