A century ago, Wisconsin’s Red Arrow Division trains in Texas for World War I 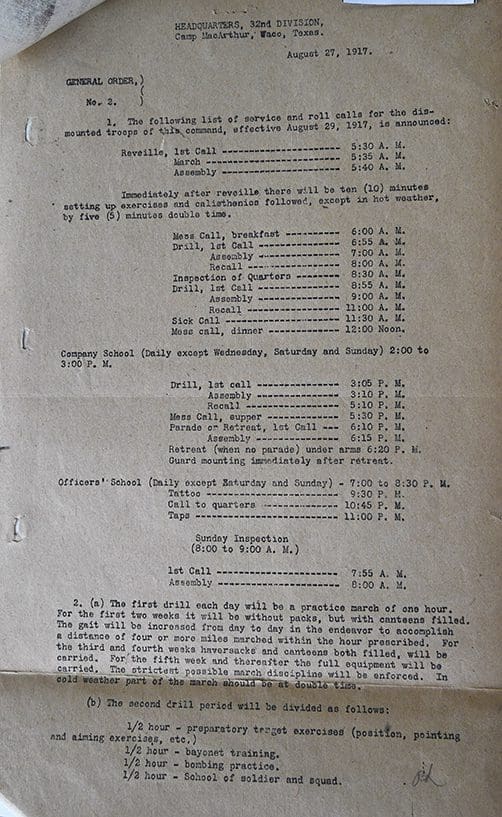 Wisconsin and Michigan National Guard Soldiers commenced training as the 32nd Division 100 years ago at Camp MacArthur, Texas in preparation for overseas service in World War I.

Lasting the entire fall of 1917, the intense training regimen laid the foundation for the division’s success in 1918 on the battlefields of France and resulting accolades as the “Red Arrow” division. 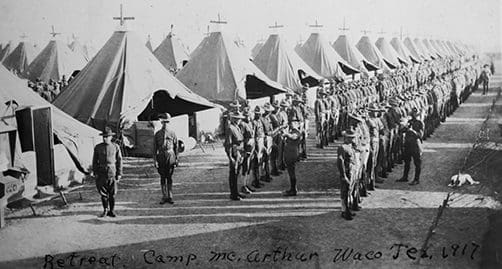 Based on guidance from the U.S. War Department, the 32nd Division headquarters published training plans for each of the division’s core functions. The regimen required for all infantry Soldiers “concentrated progressive training for a period of 16 weeks before the troops are required for service abroad.”

Training started at the individual and squad levels and included how to wear the uniform, field hygiene and basic squad maneuvers. Later training on responding to gas attacks, digging trenches and bayonet combat prepared the troops for the type of warfare they would experience in France.

A typical day started at 5:30 a.m. followed by calisthenics and breakfast. Unit training lasted until around 4 p.m. Following dinner, Soldiers spent evenings studying French or a bit of letter writing. Those units with horses, like the 107th Ammunition Train, spent the evenings caring for the unit’s several hundred animals. 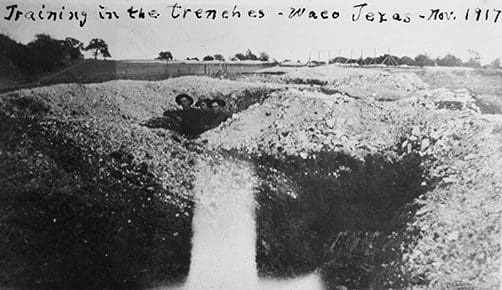 Training also shifted into the evening hours because, as per the War Department, “Night work is of the utmost importance, and should include all phases of training, scouting, patrolling . . . trench raids, combat, etc.”

The training day was longer for officers and sergeants. Although guided by a small cadre of U.S. Army officers and French and British advisors, a company’s own leaders were responsible for training their troops and spent their evenings at special classes. An article in the Sheboygan Press mentioned that Capt. Paul Schmidt, commander of Sheboygan’s Company C, 127th Infantry, spent a week instructing his men on trench digging while another officer taught sessions on bayonet warfare.

By December 1917, the 32nd Division had completed its required training and was ready to sail for France. Its Soldiers were trained on their particular jobs and its squads, platoons and companies were fully prepared to execute their particular missions. Training that would put all of those pieces together as a fully trained and functional Army division would wait until the 32nd Division arrived in France in early 1918. 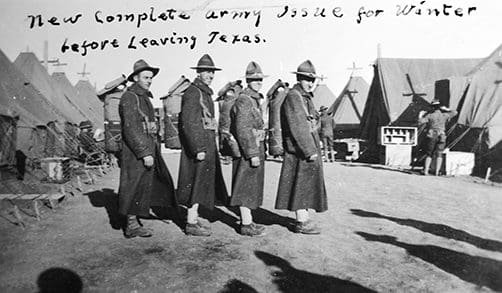 The legacy of the 32nd Division’s preparation for war at Camp MacArthur continues. Every Wisconsin Army National Guard unit today completes pre-deployment training before commencing a combat mission as part of the U.S. Army. Such training today is far more advanced and concentrates on very specific tasks required by the mission. It is currently underway for West Bend’s Detachment 1, Company B, 248th Aviation Support Battalion, who like their predecessors in World War I, recently reported to Texas for their pre-mobilization training.

The unit joins approximately 270 Airmen from the 115th Fighter Wing deployed to Korea in August, while 110 Airmen from the 128th Air Control Squadron deployed to Southwest Asia in May, and more than 70 Airmen from the 128th Air Refueling Wing in Milwaukee are deploying worldwide to support global security operations. Another 150 Soldiers from the Wisconsin Army National Guard’s 1st Battalion, 147th Aviation deployed to Kuwait last spring, and 35 Soldiers from the West Bend-based Company C, 1st Battalion, 168th Aviation deployed to Afghanistan last winter. These units continue the proud tradition of the Wisconsin National Guard answering its nation call as the nation’s primary combat reserve, just as the Soldiers of the 32nd Division did a century ago.

Today’s National Guard simultaneously fulfills its mission as the nation’s first military responder in the homeland in times of emergency. A mobile kitchen and a team of 16 Wisconsin Air National Guard troops left Wisconsin Sept. 29 en route to Puerto Rico, where they will assist with the ongoing response to hurricanes that struck the island in recent weeks. The 115th Fighter Wing’s Joint Incident Site Communications Capability, or JISCC, deployed to Puerto Sept. 23 to assist with establishing satellite communications, radio interoperability and high-bandwidth connectivity for the responding military and non-military emergency responders operating there. And approximately 650 Wisconsin National Guard troops recently returned from Florida where they provided humanitarian relief, security and traffic control support to communities in the wake of Hurricane Irma.