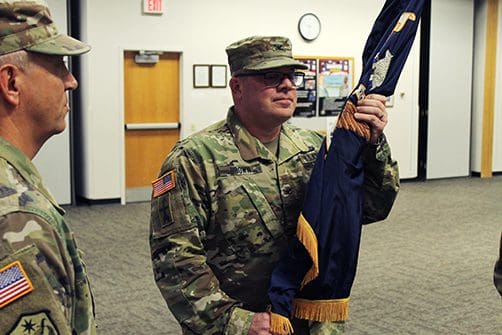 Col. Gregory J. Hirsch passed the regimental colors to his successor during a symbolic ceremony followed by cannon fire. The incoming commander, Col. Ryan C. Brown, accepted the colors, and with them command of the 426th – the unit charged with developing the organization’s future leaders.

“He has been an exceptional success in leading this organization,” said Maj. Gen. Don Dunbar, Wisconsin’s adjutant general, speaking of Hirsch’s tenure as commander. “I’m proud of you and I appreciate everything you’ve done. Great job.” 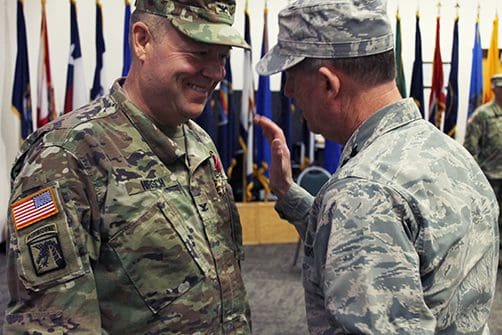 Hirsch spoke of the many accomplishments of the 426th under his command, but attributed their success to something else.

“What sets this organization apart from many others, and the key to your success, is the culture,” Hirsch stated. “Most importantly you’re developing the character and leadership traits of everybody that comes through here.”

Hirsh’s responsibilities as commander of the 426th was to supervise the operations of the Wisconsin Military Academy which provides military training for field artillery, combat medics and transportation, as well as noncommissioned officer education classes and officer and warrant officer candidate schools.

“Each Soldier that you touch, each second lieutenant or warrant officer who graduates, takes a part of this organization with them out into the force for the rest of their career,” Hirsch said. “You are truly mentoring, developing and creating the Army of the future.”

Before the ceremony, Hirsch received the Legion of Merit for his numerous accomplishments, contributions and leadership while serving as commander.

Hirsch commanded the 426th since August 2016, and said the regiment’s greatest accomplishment during his tenure was building a team that could adapt to change.

“Thank you for the incredible opportunity to command the 426th,” Hirsch said.

Brown comes to the unit after previously serving as the deputy for the Wisconsin Army National Guard’s United States Property and Fiscal Office (USPFO).

“You should all be very proud of the things that you have accomplished over the past four years under Col. Hirsch’s leadership,” Brown said. “We will continue those traditions. He’s leaving the 426th better than he found it.”

Brown previously commanded the 1st Battalion, 120th Field Artillery Regiment, and reflected on his own experiences with the 426th.

“As the commander of the 120th, I learned early on to appreciate the 426th,” Brown said. “We had NCOs come here and come back stronger.

“I understand how important it is that the 426th provides training and readiness to your units,” Brown continued. “I’m very excited.”

That readiness is crucial to the Wisconsin National Guard’s ability to fulfill its unique dual mission as the nation’s first military responder in times of emergency and as the Army’s primary combat reserve.