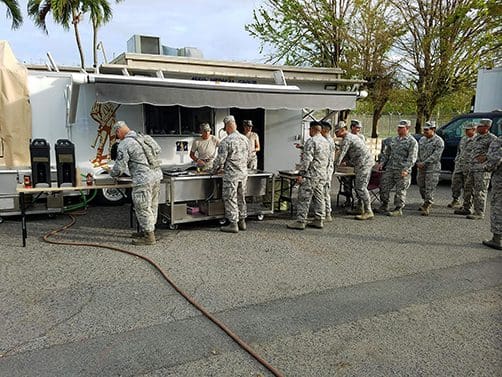 Members of the Wisconsin Air National Guard’s mobile kitchen team serve a meal to Airmen involved in relief efforts near San Juan, Puerto Rico, in the aftermath of Hurricane Maria. Approximately 16 Airmen from the 115th Fighter Wing in Madison, Wis., and 128th Air Refueling Wing in Milwaukee deployed in late September to provide meals to civilians and military members responding to the storm. Submitted photo

More than a month after Hurricane Maria ravaged the Caribbean, dozens of Wisconsin National Guard troops remain on duty assisting the people of Puerto Rico and the U.S. Virgin Islands.

For those involved, the opportunity to serve their fellow Americans in a time of need has been a rewarding experience.

“It means the world,” Senior Master Sgt. Richard Breister, from the Madison, Wisconsin-based 115th Fighter Wing, said. “It has been a very rewarding experience. The Puerto Rican people are very thankful for all the support they have received. They are so resilient and continue to give. We have worked hand-in-hand, collectively solving challenges and getting supplies where they are needed.

“We are making a great impact,” he added. “The expressions on their faces is one of gratitude and relief.” 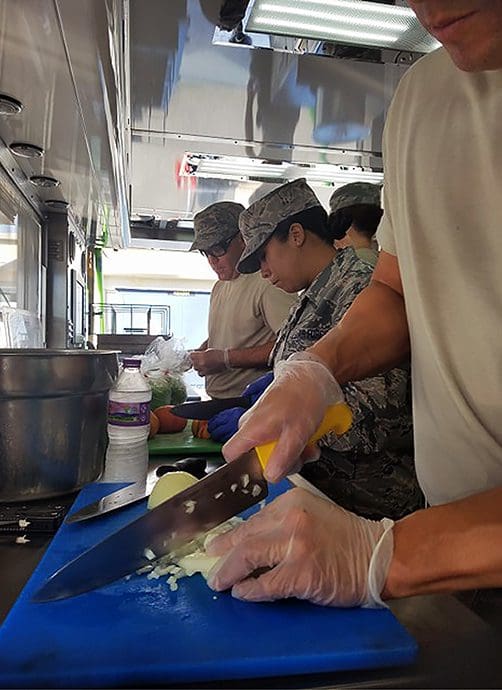 Members of the Wisconsin Air National Guard’s mobile kitchen team prepare a meal for those involved in relief efforts near San Juan, Puerto Rico, in the aftermath of Hurricane Maria. Approximately 16 Airmen from the 115th Fighter Wing in Madison, Wis., and 128th Air Refueling Wing in Milwaukee deployed in late September to provide meals to civilians and military members responding to the storm. Submitted photo

Breister and his mobile kitchen team work from 5:30 a.m. to 7 p.m. each day near San Juan, Puerto Rico in the Wisconsin Air National Guard’s Disaster Relief Mobile Kitchen Trailer (DRMKT) to provide hot meals to those involved in relief efforts. The team, made up of Airmen from the 128th Air Refueling Wing in Milwaukee and the 115th Fighter Wing, also receives and distributes rations to four other locations in Puerto Rico.

Kealey said it’s been an honor to serve alongside the Puerto Rico National Guard and help its people in their time of need.

“Coming down here, we’re not only showing the island that we’re ready to help, but showing our fellow Airmen that their uniform is just as green as ours,” he said. “They are our brothers and sisters, and there is no limit to what we will do to get them the help they need.” 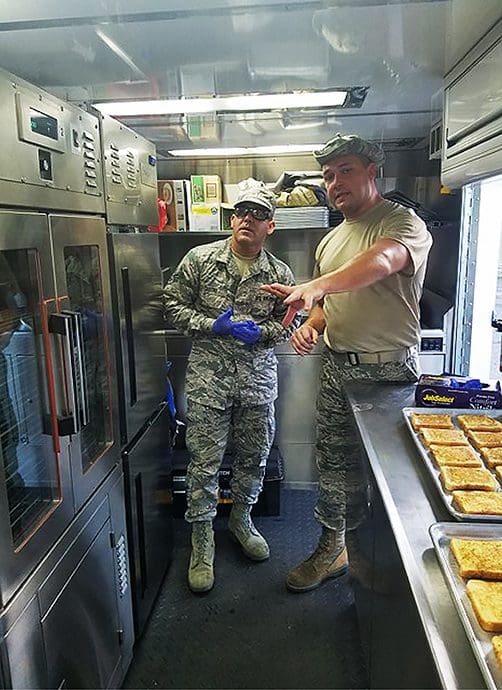 Members of the Wisconsin Air National Guard’s mobile kitchen team prepare a meal for those involved in relief efforts near San Juan, Puerto Rico, in the aftermath of Hurricane Maria. Approximately 16 Airmen from the 115th Fighter Wing in Madison, Wis., and 128th Air Refueling Wing in Milwaukee deployed in late September to provide meals to civilians and military members responding to the storm. Submitted photo

According to Breister and Kealey, flexibility is the key to success each day. The mobile kitchen team faces daily schedule changes based on the dynamic nature of relief operations. Some days the team will plan to feed a particular group only to find out at the last minute that a large group of troops had their flight delayed or troops at another location need food shipped there. But such changes are a routine part of the relief effort.

Kealey and others said the situation in Puerto Rico remains dire. He described lines that stretch for blocks just to get into grocery stores and access ATMs, leveled buildings and the lack of power and running water, but conditions slowly continue improving.

“It’s very easy to start thinking that your contribution is so small and can’t possibly make a difference,” he said. “But then, while sitting on the beach and seeing the constant pattern of helicopters delivering medical supplies, you think, ‘I probably fed those guys.’ Seeing the flat beds loaded with water and food, you think, ‘I built that pallet.’ You start to realize that you are a part of something so much bigger and that, while you may only be one person, you’re touching the lives of thousands one meal at a time.”

“In the San Juan area, it is hit and miss with power and communications each day,” Breister said. “It improves each day, yet there is much more to do. Many structures near the airport are destroyed and cell/Internet service is limited.”

Thankfully, teams like the 115th Fighter Wing’s Joint Incident Site Communications Capability, or JISCC, deployed Sept. 23 to re-establish communications capabilities for critical functions like the Federal Aviation Administration’s air traffic control center in San Juan. Since arriving, the JISCC established phone networks, WiFi for commercial Internet and multiple radio frequencies to give the FAA the needed communications lifelines to begin the critical effort of coordinating air traffic in and out of Puerto Rico. That air traffic was critical to re-establishing air service carrying needed supplies, personnel and equipment to the island.

“Without us, commercial planes wouldn’t have started landing when they did,” Capt. Jeffrey Rutkowski, the officer in charge of Wisconsin’s JISCC, said. “We watched as the moment happened when the FAA was, once again, put back into service due to our capabilities we brought.”

“We know that those planes flying into Puerto Rico are bringing additional first responders, food, water, equipment, supplies and so much more of what Puerto Rico needs to rebuild, and we helped with that,” Rutkowski added.

The Airmen on his team were grateful for the opportunity to make such a large impact.

“I feel the most rewarding part of this was seeing an inoperable international airport come back up and watching it become the hub for incoming supplies and outgoing and incoming personnel,” said Staff Sgt. Cory Sachtjen. “It’s satisfying to visibly see the level of impact.”

The JISCC’s response is the culmination of years of training since its inception five years ago.

“Overall, we are happy to be here helping,” Rutkowski said. “That’s what we’ve been training to do for the last four years on the JISCC, so this is a great opportunity to utilize our training and skills and really make a difference.”

“In the past, most of the things I have been involved in have been planned training events,” said Staff Sgt. Shelby Carter. “I really got to embrace what it means to be a ‘minuteman’ in the Guard, which is what we all are excited to do throughout our careers.”

No matter their role, the Wisconsin National Guard Soldiers and Airmen responding in the wake of Hurricane Maria this fall know that they have made a positive impact on the lives of their fellow Americans.

“Boots are on the ground, fed, rested, and working hard,” Kealey said. “The road to recovery will be slow and very long, but Puerto Rico will be left better off that when we as a military first arrived.”

“I’m incredibly proud of the service of our Wisconsin National Guard Soldiers and Airmen these past two months,” Dunbar said. “Serving our fellow citizens in their hour of need is at heart of who we are as National Guard members. Whether during our response to Florida after Hurricane Irma, or in the Caribbean now, they continue to demonstrate why our nation trusts the National Guard to remain always ready when our nation calls us to serve in times of emergency, or in combat overseas.”

In addition to the JISCC, which deployed Sept. 23, to Puerto Rico with the capability to provide satellite communications, and radio interoperability of multiple commercial and tactical radio systems, and the mobile kitchen team, which deployed shortly after the JISCC with its DMRKT capable of feeding up to 1,000 people in 90 minutes, other Wisconsin National Guard resources deployed as well.

Two UH-60 Black Hawk medevac helicopters and 19 Soldiers also deployed to the U.S. Virgin Islands earlier this week, where they will provide additional capabilities to transport patients in need of medical care to health care facilities.

Meanwhile, two airfield managers from the 115th and Volk Field Combat Readiness Training Center in Camp Douglas, Wisconsin, deployed to Georgia earlier this month where they are assisting with staging and movement of aircraft bound for the Caribbean. A member of the Madison-based 54th Civil Support Team also deployed to Puerto Rico to augment communications support there, and the Wisconsin Guard sent its RC-26 aircraft and crew to Puerto Rico to assist authorities with incident assessment and awareness.

Approximately 650 Wisconsin National Guard troops recently returned from Florida where they provided humanitarian relief, security and traffic control support to communities in the wake of Hurricane Irma as well.