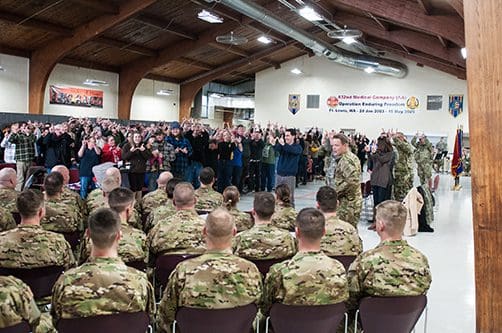 Gov. Scott Walker and families of deploying Soldiers with Company C, 1st Battalion, 168th Aviation show the Wisconsin “W” to the unit during a sendoff ceremony at the unit’s armory in West Bend, Wis. Feb. 2. The unit landed safely in the U.S. Nov. 2 after a nine-month deployment to Afghanistan. Wisconsin National Guard photo by Staff Sgt. Alex Baum

The unit provided UH-60 Black Hawk medevac support to U.S. and coalition forces in their assigned area of operations.

Senior leaders from the Wisconsin Army National Guard were on hand at Fort Hood to greet the Soldiers as they got off the plane.

“Being there and being able to greet them coming off the plane and shaking their hands, telling them ‘thank you for a job well done’ is more than words can express,” Command Sgt. Maj. Paul Metz, said. “Wisconsin does a great job in making sure its Soldiers are greeted anytime and anywhere. It was a wonderful experience being able to see them all come down the stairs and shake every Soldier’s hand.”

Metz was joined by Brig. Gen. Joane Mathews, the Wisconsin Army National Guard’s assistant adjutant general for readiness and training, in welcoming the Soldiers back to U.S. soil.

“They all had huge smiles on their faces, despite the long flight from Afghanistan,” Mathews said.

“They thanked me for being there and welcoming them home, but I was the thankful one,” she added. “They made Wisconsin proud once again by pulling off a very busy and successful deployment, and I felt so lucky to have been the one shaking their hands.”

The unit originally mobilized in February before conducting pre-mobilization training at Fort Hood and then deploying to Afghanistan where they provided aeromedical evacuations for personnel operating in the region.

In addition to the 168th, Wisconsin National Guard troops continue to play an active role in global security operations, fulfilling its mission as the primary combat reserve of the Army and Air Force. Soldiers of the West Bend-based 248th Aviation Support Battalion deployed to the Middle East Sept. 30. Approximately 270 Airmen from the 115th Fighter Wing deployed to Korea in August, while 110 Airmen from the 128th Air Control Squadron deployed to Southwest Asia in May, and more than 70 Airmen from the 128th Air Refueling Wing in Milwaukee are deploying worldwide to support global security operations. Another 150 Soldiers from the Wisconsin Army National Guard’s Madison, Wisconsin-based 1st Battalion, 147th Aviation deployed to Kuwait last spring as well.

Meanwhile, the Wisconsin National Guard has been busy fulfilling the other half of its dual-mission as the nation’s first military responder in times of emergency. Approximately 650 Wisconsin National Guard troops recently returned from Florida where they provided humanitarian relief, security and traffic control support to communities in the wake of Hurricane Irma. In addition, Airmen from the 128th Air Refueling Wing, 115th Fighter Wing and Volk Field Combat Readiness Training Center deployed to Puerto Rico and the U.S. Virgin Islands in the wake of Hurricane Maria this fall.

The Soldiers of Company C, 1st Battalion, 168th Aviation will return to Wisconsin sometime in the next few weeks after completing demobilzation requirements at Fort Hood.