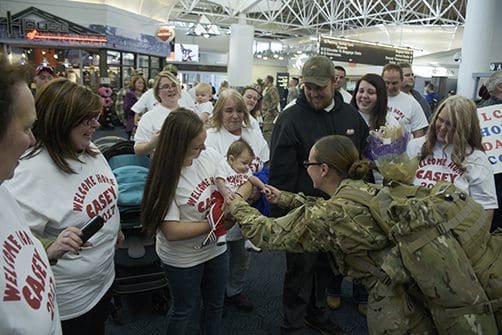 MILWAUKEE — A few days before Veterans Day — and also in time for deer season and Thanksgiving — more than 30 Wisconsin Army National Guard Soldiers returned to Wisconsin from a deployment lasting several months to Afghanistan.

Sgt. Casey Weiss was pleasantly surprised to see 22 members of her family greet her at Mitchell Field when her detachment returned to Wisconsin Nov. 8. 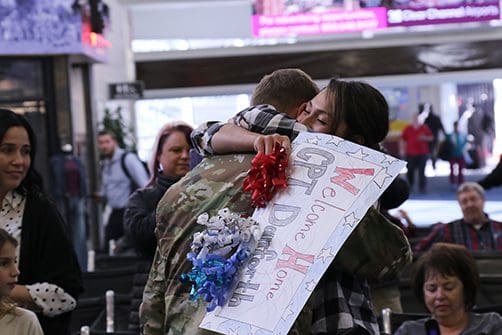 Despite being a relatively small unit, the detachment of Company C arrived in Milwaukee on five different flights, in groups ranging in size from three to 10.

“Fantastic job on your deployment,” Dunbar said. “I know it’s been a long time, but I’m glad you’re back in time for deer season and Thanksgiving.”

Sgt. Maj. Georgett Hall, with the Wisconsin Army National Guard’s 64t Troop Command, thanked family members for their sacrifice during the deployment, and reminded the returning Soldiers and their families of resources available to them as the Soldiers settle back into family life.

“Thank you for everything you’ve done over the past year,” Hall said. “Your efforts have not gone unnoticed.”

Brig. Gen. Joane Mathews, the assistant adjutant general for readiness and training, reiterated what she told the Soldiers when they arrived at Fort Hood, Texas, a week earlier.

“I want to tell you what I told them — how incredibly proud I am of the hard work and effort they did over in Afghanistan,” Mathews, herself a qualified helicopter pilot, told family members. “I know it wasn’t easy for them, but it also wasn’t easy for you back home.”Mathews told the families that their Soldiers could not have completed their missions without support from home. 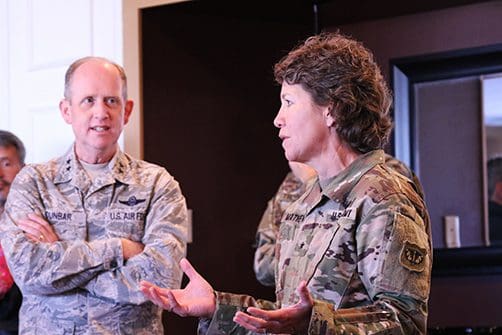 “Thank you for everything you did — you are very much appreciated,” Mathews said.

Weiss praised her family for the support they provided.

“They understood whenever I had to hang up quickly or when I couldn’t call,” she said. “Whatever I needed, they sent to me.”

Dunbar noted that the Wisconsin Army National Guard’s aviation assets are so good, they’ve been spread razor-thin around the world.

Dunbar also encouraged the returning Soldiers to thank their employers for supporting them during their deployment.

“I think we did a lot of amazing things — helped people,” she said. “We got our job done and done safely. I wouldn’t want to be flying with any other group of people.”

In addition to the 168th, Wisconsin National Guard troops continue to play an active role in global security operations, fulfilling its mission as the primary combat reserve of the Army and Air Force. Soldiers of the West Bend-based 248th Aviation Support Battalion deployed to the Middle East Sept. 30. Approximately 270 Airmen from the 115th Fighter Wing deployed to Korea in August and returned to Wisconsin Nov. 8, while 110 Airmen from the 128th Air Control Squadron deployed to Southwest Asia in May, and more than 70 Airmen from the 128th Air Refueling Wing in Milwaukee are deploying worldwide to support global security operations. Another 150 Soldiers from the Wisconsin Army National Guard’s Madison, Wisconsin-based 1st Battalion, 147th Aviation deployed to Kuwait last spring as well.

Meanwhile, the Wisconsin National Guard has been busy fulfilling the other half of its dual-mission as the nation’s first military responder in times of emergency. Approximately 650 Wisconsin National Guard troops recently returned from Florida where they provided humanitarian relief, security and traffic control support to communities in the wake of Hurricane Irma. In addition, Airmen from the 128th Air Refueling Wing, 115th Fighter Wing and Volk Field Combat Readiness Training Center deployed to Puerto Rico and the U.S. Virgin Islands in the wake of Hurricane Maria this fall.