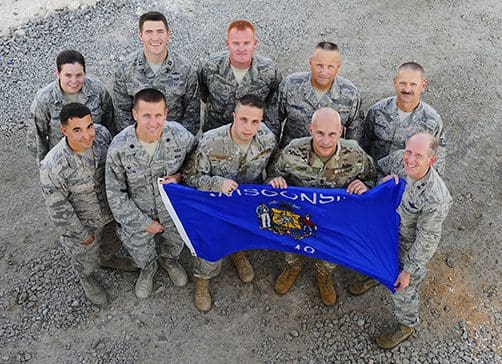 While more than 100 Wisconsin National Guard Airmen returned home just in time for Thanksgiving and the holiday season, hundreds more remain deployed to locations around the world fulfilling their duties as the primary combat reserve of the Army and Air Force.

The 128th Air Control Squadron returned to Wisconsin Nov. 20 after a six-month deployment, but the 1st Battalion, 147th Aviation, based in Madison, Wisconsin, remains in Kuwait and Iraq after deploying last winter. 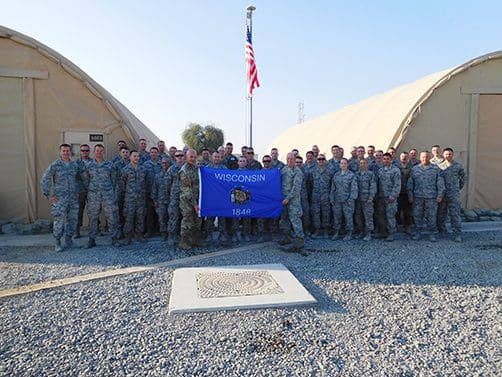 Earlier in the month approximately 270 Airmen from the 115th Fighter Wing returned to Madison from a deployment to Korea. Soldiers from the Wisconsin Army National Guard’s 248th Aviation Support Battalion deployed to the Middle East in September, while aviators from Detachment 5 deployed to Afghanistan in November. Nearly 200 Soldiers of the 1st Battalion, 147th Aviation deployed to Kuwait and Iraq last winter, and approximately 35 Soldiers from West Bend’s Company C, 1st Battalion, 168th Aviation returned from a nine-month deployment to Afghanistan in November. Approximately 70 Airmen from the 128th Air Refueling Wing in Milwaukee are in the midst of deployments worldwide as well.

Over the past three months, the Wisconsin National Guard also deployed Soldiers and Airmen to Florida, Puerto Rico and the U.S. Virgin Islands to assist with hurricane recovery efforts, and Soldiers responded to flooding over the summer in Monroe County and Burlington, Wisconsin. 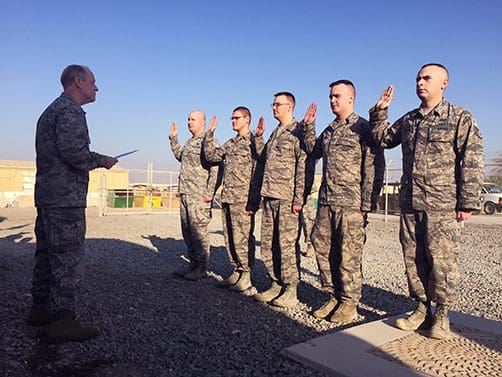 Despite an incredibly busy operations tempo for the Wisconsin National Guard in recent months, support from families, Wisconsin communities and employers has never been higher or more important.

Lt. Col. Scott Bush, the commander of the deployed 1st Battalion, 147th Aviation, thanked all those who continue to support the unit during his unit’s deployment, especially the families, employers and communities that support the Soldiers while they are away.

“To quote [Wisconsin’s Adjutant General] Maj. Gen. Dunbar, ‘Soldiers are the bricks that build a wall, but family, friends, and employers are the mortar that hold us together — and without them, we would easily fall,’” Bush said.

Dunbar and Command Sgt. Maj. Rafael Conde, the senior enlisted advisor for the Wisconsin Army National Guard, recently travelled to the region to visit with Airmen from the Volk Field, Wisconsin-based 128th Air Control Squadron and Soldiers from the 1st Battalion, 147th Aviation. The 128th returned to Wisconsin a short time after their visit.

“The trip provided a great capstone to an outstanding deployment,” Lt. Col. Michael Western, the 128th Air Control Squadron commander said. “It was a great opportunity for the Airmen to tell their story to the adjutant general and command sergeant major first-hand. The team here has accomplished a lot. They have plenty to be proud of, and this trip came just before our replacements came.”

The 128th’s more than 100 Airmen had a critical mission overseas, where the unit was responsible for managing the airspace in one of the most volatile parts of the world. Their responsibilities included operating from 10 separate locations and managing the command and control of air combat missions across three different areas of operations including Operations Inherent Resolve, Resolute Support, Freedom Sentinel and the Combined Defense of the Arabian Gulf – an area of almost 1 million square miles.

Western described the unit’s impact on the region as “immense.”

“The progress against [Islamic State] makes this self-evident,” he said, referring to the recent gains made against the organization. “During our time, they have gone from being a caliphate to having to use insurgent tactics. This was enabled with proactive battle management command and control, which is what we provide.”

The Soldiers of the 147th Aviation were also grateful for a visit from their senior leaders, and like their brethren in the Air National Guard, they have been hard at work in a volatile region.

The unit has personnel and aircraft spread between four countries and five separate locations. Each location has unique mission sets, but the unit’s primary mission is to increase the medevac coverage throughout the area of operations. In addition to medevacs, the 147th is helping escort medevac flights, support troop movements and transport other key officials and leadership in the region.

“Of course, the mission cannot be accomplished without the support of Company D maintainers, Company E refuelers, and headquarters staff in order to keep our aircraft and personnel ready at a moment’s notice,” Bush said in reference to the Soldiers support the pilots and aircraft.

Bush said the deployment has posed its share of challenges, many of which were related to the unit’s status as a “request for forces” unit, meaning that the 147th deployed as part of a request to bring additional forces to theater as opposed to replacing a unit that was already conducting a mission.

“With a typical deployment, you would have a unit that you conduct a ‘relief-in-place’ with, conducting left-seat, right-seat functions in order to familiarize yourself with the particular mission,” he said. “Our Soldiers did not have the luxury of a relief-in-place and had to hit the ground running in order to assume the multiple missions in multiple countries, meeting every suspense date and challenge that has been placed upon them.”

Likewise, the 128th Air Control Squadron had to blaze its own trails at times as well.

“We were able to stand up a new detachment in austere conditions,” Western said of his unit. “Most Airmen spend their whole career just practicing this, never getting to actually execute in a wartime scenario. Our unit not only got the opportunity to do this, they excelled in the execution of it, accomplishing the feat in just 21 days from site survey to being fully mission capable.”

The 147th integrated its mission with its sister battalion from Michigan, as well as units from Texas and Kansas, all of which came together to form Task Force Wraith. The 147th has been a critical component of the task force.

“The fight against ISIS continues, and as U.S. and coalition forces move throughout the region in order to carry on the fight, they cannot conduct missions in hostile territory until they are ensured that medevac will be there to provide support, if necessary,” Bush said. “The impact our Soldiers have made on this advancement against ISIS is uncalculatable.”

Bush said the nearly 200 deployed Soldiers of the 147th have also been hard at work building partnerships and capacities with coalition nations. During its deployment, the unit has conducted multiple joint training events with the U.S. Navy and worked with several different coalition nations to further develop aviation skills. All of these functions have a direct impact on maintaining the fragile stability of the Middle East, Bush said.

Dunbar was grateful for the opportunity to visit both the 128th Air Control Squadron and the 147th Aviation in theater.

“I’m incredibly proud of the selfless service and sacrifice of our Soldiers and Airmen,” Dunbar said. “It was an honor to travel overseas to visit them and see first-hand the incredible impact our troops are having on the combat zone. To witness their efforts overseas along with what the Wisconsin National Guard has accomplished simultaneously on hurricane relief missions and serving here in Wisconsin has been nothing short of extraordinary, and it shows why America trusts the National Guard to remain always ready, and always there.”

Hundreds of Soldiers and Airmen from various Wisconsin National Guard units will remain deployed throughout the holiday season, and the Guard continues to stand ready for additional missions if the state or nation calls them into service.