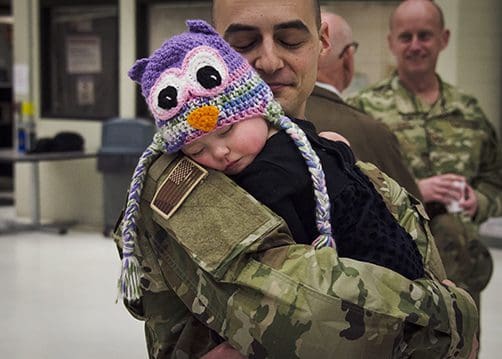 A deploying Airman with the Wisconsin Air National Guard’s 128th Air Refueling Wing embraces his daughter after a Dec. 2 sendoff ceremony at General Mitchell Air Field in Milwaukee. For some Airmen, this will be their first time away from their families as they embark on this deployment. 128th Air Refueling Wing photo by Master Sgt. Kellen Kroening

Approximately 70 Airmen with the 128th Air Refueling Wing are deploying to various locations worldwide in support of Operation Inherent Resolve, Operation Freedom Sentinel, and the Pacific Command Theater Support Package. The Airmen will be deployed for months working in a variety positions, including theater security, operations, aircraft maintenance, logistics and communications.

This is the first military deployment for Senior Airman Anthony Parco, a client systems technician for the 128th Air Refueling Wing Communications Flight. 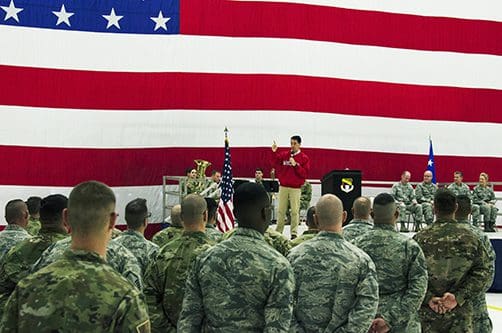 “Even though this is my first deployment, my mentors and sponsors have trained and prepared me to be ready for when I go overseas,” Senior Airman Parco said. “Because I’m deploying as a senior airman, I really want focus on developing my leadership skills and become even more experienced in my job. Of course, I will miss my family and friends, but this is what I signed up to do.”

Parco joined the military in the footsteps of his father, Master Sgt. Matthew Parco, the chief of information protection for the 128th Air Refueling Wing Security Forces Squadron.

“I’m proud that my son stepped up to go on this deployment,” Master Sgt. Parco said. “I have deployed a number of times and know it takes courage to leave home and go overseas. But I know he’s going to do well and come back an even better Airman.” 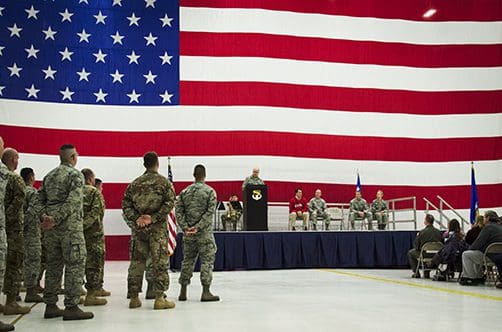 Airmen are not the only ones effected by deployments. The audience at the event was filled with parents, spouses, children, friends, civic leaders and employers. These are the people who will take care of things on the home front while their military member serves overseas.

The 128th Community Council, American Legion, American Red Cross, Employer Support of the Guard and Reserve, and a Girl Scout troop from Burlington, Wisconsin were on hand at the event to provide resources and information to the deployers and their families.

“Keeping the family members informed while their Airmen is deployed is an area that we are making improvements,” said Lt. Col. Matthew Friese, 128th Air Refueling Wing chaplain. “We are going to hold a family member informational luncheon monthly to strengthen the connections between the support agencies, the 128th Air Refueling Wing and the deployed Airman’s family.” 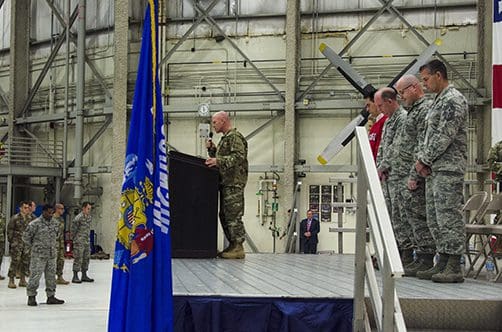 Gov. Scott Walker attended the sendoff ceremony to deliver a message of encouragement to the deploying Airmen.

“You are the best of the best,” Walker said. “You’re well trained, well prepared and well focused. You’re going to be dispersed in multiple theaters throughout the world and they’re going to look to you for your expertise, your skills, your courage, and your abilities. You are a part of a proud tradition from Wisconsin and we are proud of you.”

Maj. Gen. Don Dunbar, Wisconsin’s adjutant general, echoed a similar sentiment while expressing gratitude to both employers and family members of those deploying.

“I’m proud of each of you for your willingness to serve your country in a time of war,” Dunbar said. “I know that you are ready, but I also know that today is a tough day for the loved ones staying behind. Families, communities and employers are the bedrock of our National Guard, and without your sacrifices and patriotism, we could not accomplish the critical work that our nation asks of us.”

In addition to the 128th Air Refueling Wing’s deployment, the Wisconsin National Guard continues to play an active role in global security operations, fulfilling its role as the primary combat reserve of the Army and Air Force.

The 128th Air Control Squadron returned to Wisconsin Nov. 20 after a six-month deployment, but the 1st Battalion, 147th Aviation, based in Madison, Wisconsin, remains in Kuwait and Iraq after deploying last winter. Earlier in the month approximately 270 Airmen from the 115th Fighter Wing returned to Madison from a deployment to Korea. A group of more than 50 Airmen from the 128th Air Refueling Wing also deployed worldwide in support of global contingency operations in September.

The Wisconsin National Guard has also been busy supporting missions in support of civil authorities as the nation’s first military responder in times of emergency. In September the Wisconsin National Guard deployed Soldiers and Airmen to Florida, Puerto Rico and the U.S. Virgin Islands to assist with hurricane recovery efforts, and Soldiers responded to flooding over the summer in Monroe County and Burlington, Wisconsin.