Aviation unit back on U.S. soil 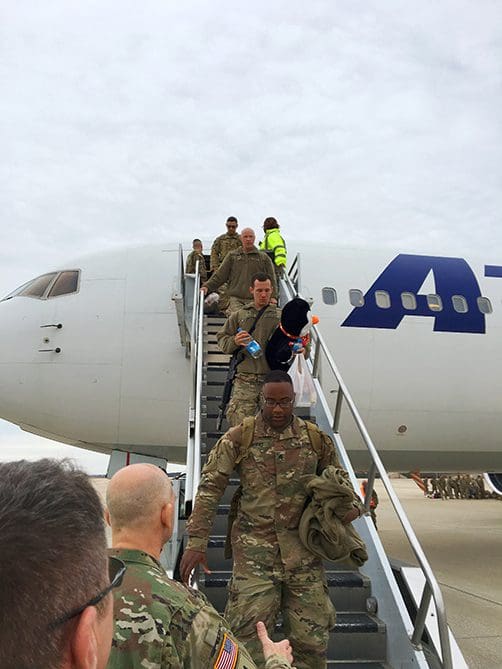 The group of approximately 75 Soldiers landed at Fort Hood, Texas, where they will complete post-mobilization requirements before returning to Wisconsin.

Several smaller groups from the 147th returned in waves over the past few weeks, but the group that landed Sunday represented the unit’s main body and the last of the unit’s Soldiers to return from overseas.

“They were glad to finally be home,” O’Donahue said after the unit’s arrival. “We’re all proud of what they accomplished overseas, and we’re looking forward to welcoming them back to Wisconsin and reuniting them with their families and loved ones sometime soon.

The Wisconsin National Guard is planning a homecoming ceremony for the unit and will announce those details as their return draws near.

Even with the unit’s return, the Wisconsin National Guard remains heavily engaged fulfilling its mission as a key component of the primary combat reserve of the Army and Air Force. In November, approximately 270 Airmen from the 115th Fighter Wing returned to Madison from a deployment to Korea. Soldiers from the Wisconsin Army National Guard’s 248th Aviation Support Battalion deployed to the Middle East in September, while aviators from Detachment 5 deployed to Afghanistan in November, and approximately 35 Soldiers from West Bend’s Company C, 1st Battalion, 168th Aviation returned from a nine-month deployment to Afghanistan in November. Approximately 70 Airmen from the 128th Air Refueling Wing in Milwaukee are in the midst of deployments worldwide, and other Airmen from the 128th deployed earlier in the fall as well. Last spring, approximately 120 Soldiers from the 32nd Military Police Company returned from a deployment to U.S. Naval Station Guantanamo Bay, Cuba.

Meanwhile, the Wisconsin National Guard has been busy fulfilling its other mission as the state’s first military responder in times of emergency. Last fall, the Wisconsin National Guard deployed Soldiers and Airmen to Florida, Puerto Rico and the U.S. Virgin Islands to assist with hurricane recovery efforts, and Soldiers responded on multiple occasions to flooding over the summer in Monroe County and Burlington, Wisconsin.