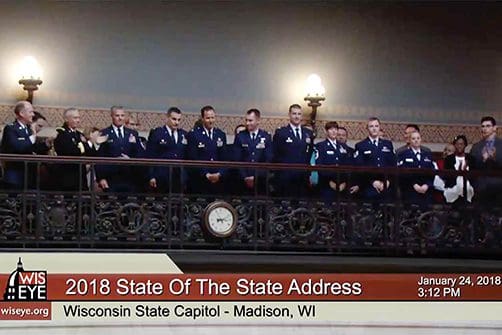 MADISON, Wis. — Gov. Scott Walker congratulated the Wisconsin Air National Guard’s 115th Fighter Wing for its selection as one of two Air National Guard bases to field the F-35A Lightning II during the opening moments of his 2018 State of the State address.

“Out of all the states in America, we had the number one location,” Walker said during the Jan. 24 address.

“I am looking forward to hearing the F-35s take off,” he continued, gesturing to members of the 115th Fighter Wing in attendance. “That’s the sound of freedom.”

Walker announced that the 115th Fighter Wing was a preferred location for the F-35 last Dec. 21 at the fighter wing base in Madison. Pending the results of an environmental impact analysis, the F-35A Lightning fighter jets could arrive at Truax Field beginning in early 2023. The announcement bolsters the Wisconsin National Guard’s dual mission as the state’s first military responder and a key component of the nation’s primary combat reserve.

“One of the most intense spots in the world,” Walker said, acknowledging heightened tensions with North Korea.

Walker also congratulated Maj. Gen. Mark Anderson, whom the governor promoted to his current rank during a Jan. 12 ceremony in the Senate chamber of the state capitol building.