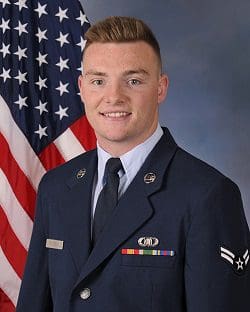 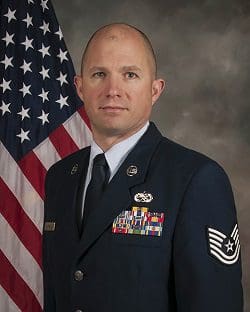 And all three play critical roles ensuring that the Wisconsin Air National Guard continues to fulfill its duties as the primary combat reserve of the Air Force while simultaneously remaining ready to serve the governor in times of emergency as well.

Pederson said he never would have guessed he would be named an Outstanding Airman of the Year. 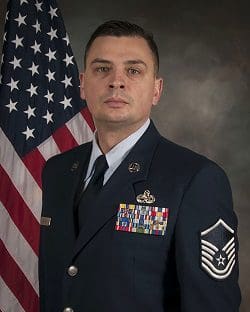 “This isn’t just about me,” Pederson said, “but everyone that helped set me up for success.”

At Volk Field, Pederson is responsible for detecting, identifying, reporting and tracking aircraft within a certain area of responsibility — a crucial part of providing air superiority. He urged his colleagues not to be satisfied in their work.

“Hard work, discipline, reliability, the ability to listen and understand, and a drive to be the best at what you do,” Pederson said of what it takes to be Airman of the Year. “Get to know your colleagues, do your job as well as you can, and don’t settle for anything. Constantly strive to be the best Airman you can be.”

Branz described being the Wisconsin Air National Guard’s Noncommissioned Officer of the Year as “a very humbling feeling,” and urged others seeking the same honor to “steady the course and keep at it.” 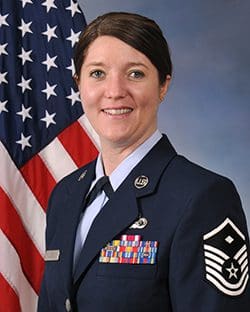 “It’s not really something you can do in 12 months,” Branz explained. “I feel it’s a career filled with constant dedication in doing your job to the best of your abilities. Living by the core values, always doing what is right even when you might be tempted to take the easy way out.”

In addition to inspecting, repairing and dispatching aerospace ground equipment, Branz is a facilities manager, tool accountability and control monitor, safety representative and a member of the wing inspection team. He also represents the base honor guard during public and private events.

Kenney said the mantle of Senior Noncommissioned Officer of the Year means a lot, in part because his father and brother both retired as members of the Wisconsin Air National Guard, as a technical sergeant and a lieutenant, respectively. However, he said the honor reflects his mentors and his team.

“There are many worthy recipients of this award throughout my unit,” Kenney said. “I’m humbled I was recognized by my leadership.”

Kenney said his job in the maintenance squadron keeps Air Force assets mission-capable and ready to mobilize at a moment’s notice. He also mentors future leaders on his team and ensures safety and compliance.

“Work hard to achieve in your [Air Force Skills Code], set goals, and care about your team and community,” Kenney said.

Jensen demonstrated her time management and multi-tasking skills while deployed last year, developing a workable lodging plan for 325 Airmen in 138 rooms, and improved an accountability tracking system for deployed Airmen.

“I absolutely love being a drill-status Guardsman because it allows me to serve my country while balancing my life,” Jensen said. “What I love about being a first sergeant is mentoring Airmen in their careers, helping them reach their goals, and working through hardships in their lives to achieve their personal readiness.”

Jensen said her parents were major influencers on her decision to serve in the Wisconsin Air National Guard — particularly her stepfather Clint Niebuhr, who served for 32 years. She works full-time as a security program assistant with the Wisconsin Department of Corrections, and is a single mom to two boys ages 6 and 10.

“Sometimes we have a lot of juggling of schedules, but it all works out,” she said.

Safer said he is “honored and humbled” to serve alongside these Airmen.

“With Airmen like these in our ranks, I think we can all agree that the Wisconsin Air National Guard — and the Air Force as a whole — has a very bright future,” he said.